IN WHICH A TEMPO RUN TURNS INTO A RUN-LIKE-HELL RUN, WE DISCUSS THE FASCINATING DIFFERENCES BETWEEN MILES AND KILOMETRES*, AND HOLLY SAYS… WELL, WHAT SHE ALWAYS SAYS…

When you’re in a six-days a week programme, life becomes a bit of a blur. If you’re not checking the weather to see when’s good to run, you’re out running, or you’re back home, throwing sweaty gear into the washing machine, uploading your data, and plotting the next outing. All of which is ridiculous really, in comparison to real work, and real commitments. I’m just trying to big it up 😉

Monday was the standard 10k recovery run, which as my Garmin page says, was cut short by a k or two as I met an ex-fireman in the park, pushing a buggy. (He was pushing the buggy, I was running…yeah, yeah, we know. Get on with it…) 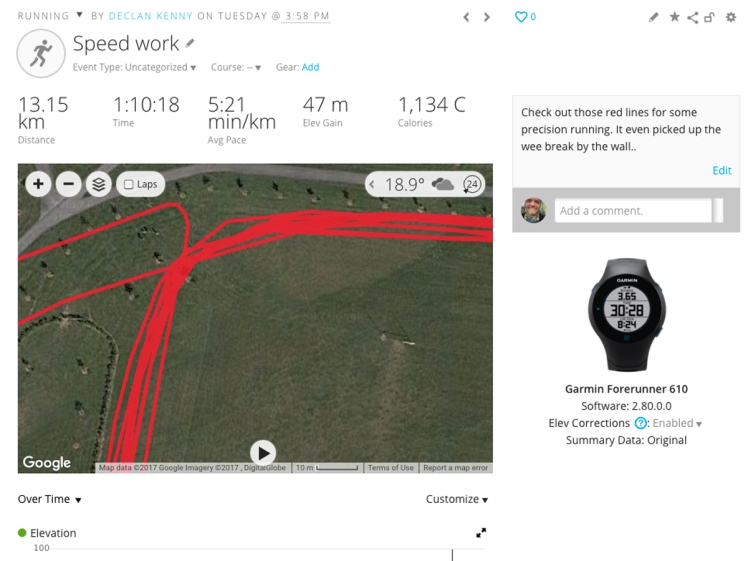 This is what repetitive speed work looks like when it’s mapped. A blur of red lines. Note the reference to a toilet break. Damn those GPS watches are good.

Wednesday and yet another recovery run of about 8k. My definition of radical is running a loop the other way. Sometimes you just have to cut loose, throw caution to the wind, and run a slightly different course than the last two hundred…

Thursday, and a timely reminder why I am stuck running loops in my local park. Out with Mark doing a tempo run, and the beeper went off. I knew we were a bit skinny on crew, so I had to seriously up the tempo to try and make it back to the station for the call. I was a good way out, and even with a short-cut through the woods, I could tell I needed some intervention to get back in time.

As I hit the avenue, with about half a mile to go, I sensed a car behind me. I flagged it down and jumped in the back seat and said “take me the fire station!”. Or something like that. Can’t recall. He was very nice anyway, and even let me convince him to break the temporary traffic lights at the top of the hill. “I’m a fireman”, I said. Or something similar. Can’t remember. I’d say he had to hose the sweat off his back seat.

Anyway, made the call in the nick of time, which turned out to be an ambulance assist. My tempo run was cut short at just over 6k, but I reckon I got my money’s worth. My legs seem to think so anyway.

Friday was a recovery run, and the legs were okay after the excitement of yesterday. I tried to keep the pace honest too. 10k in all.

Saturday, and as I write this, the rain is bucketing it down. Had an early run this morning. Ciaran called by around 8am and we got in a decent few miles. Or kilometres. Whatever you’re having yourself, like. Ciaran runs in miles, so his runs and his pacing are in the old school imperial measurements. I’ve gone metric. It’s not really a problem but when I ring and say ‘fancy a run?’ and he says ‘yeah, I have about 9 miles to do today’, I have to do some quick calculations to see what that is in new money. This morning, I had 19k to do; Ciaran slightly less.

The stats page on the Garmin Connect site shows how the miles (don’t!) are clocking up. The body is holding up reasonably well too. Starting to feel it, and need to get back into the gym for some leg raises and other workouts for core strength. I gather we are getting a new (second-hand) gym bike too, so that will help with warm-ups, especially if the weather is really crook. But the last thing I need (okay, maybe not the last thing, but it would not be welcome) would be a recurrence of IT band problems, or the Achilles flaring up. Not to mention the other bits and bobs that come and go when you’re hitting fifty and don’t have the legs of Mo Farah (though in fairness, if I had Mo’s legs, I’d look rather odd).

And finally Holly. Holly says sod all that running; when are you taking me for a walk, you lazy bastard? 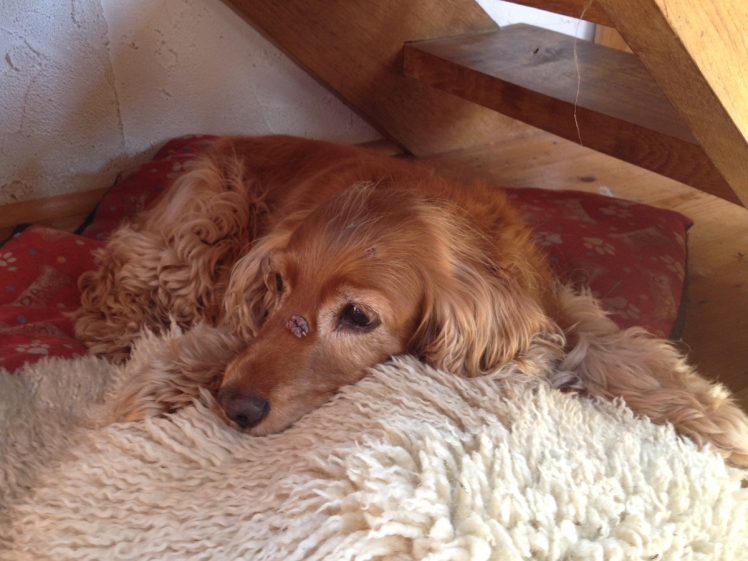 * The difference between miles and kilometres is pretty obvious, but in true Irish fashion, we had to make life complicated. Most Irish directions to lost tourists in cars don’t start with distances or where to turn left. No. The conversation goes along the lines of “Excuse me, how do we get to Glendalough?” to which the reply is: “Well, I wouldn’t start from here, anyway…”

The metric system was adopted from the UK, who themselves got it from Europe. As they had just joined the EEC, they took it on board in 1965. But being curmudgeonly feckers, they never really took to it, and insisted on driving everywhere in miles, and drinking pints. Ireland’s entry to Europe also signalled a change to metric, and we started the process in the 1970s. How long did it take to change a few street signs? According to Google, we finished the job in 2005. Well, we can’t be accused of rushing into to anything, I’ll grant them that.

The metric system was clearly a cunning French plot to confuse the Brits. Most likely the brainchild of French cleric Gabriel Mouton in 1670, though plenty of others had similar ideas. The system uses a variety of constants in physics (or the real world, as some would say) to derive the base units. Water is one, as is the speed of light. It is quite a neat system – as in neat and tidy. It’s a decimal system, and comes in handy, not least if you’re a fireman and pump operator and have to do quick fire-ground calculations. Same with air pressure. Anyway, enough of that. In old Ireland, measurements were also based on real-world things. Units of distance, for example, were grains, thumbs, palms, fists, feet and steps. Twelve thumbs were a foot. The whole twelve thing for measuring, I assume, comes from Christianity. But there’s lots to read on this theory and perhaps the ‘dozenal’ system is older than one current religion. Check out this article. Fascinating stuff. And a nod to how useful base-12 really is. And of course, it’s still in use today, all over the world. Just look at the clock. Or degrees on a protractor.

Here’s my favourite few lines from the piece:

“Unfortunately, converting to the dozenal system at this point would be exceptionally difficult, and over-the-top expensive. While the long-term benefits are obvious, it’s probably not worth the short-term pain. But that said, living with a sub-optimal counting system from here to eternity seems sad.”

So, for the cheap-seats at the back, 5 miles is 8 kilometres. That’s all you need to know. And now I have to go and run a magh-space, which is the distance from which a cock-crow or church bell can be heard. According to an ancient Irish law text, anyway.