Not mine, but Saoirse’s. The running has been tough on her back, not least when you are carrying around ruptured L4 and L5 discs. That’s a whole other story but certainly a new pair of runners can’t do any harm. And they were half price too, so a good bargain. 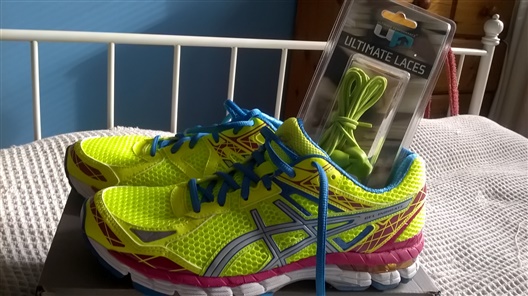 They’re Asics Gel Indicate and they got their first outing today. The reports are good. The elastic laces will also be fitted.

I took myself out as well. After a reasonably good week of training, I felt like I hadn’t really had a decent run. Some good runs, and some decent distance, but just not anything with a little bit of pressure. Or sweat.

So I took off on Sunday, into the park. 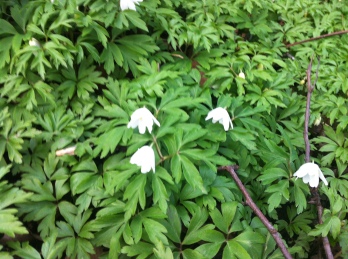 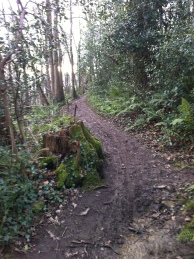 The above pictures aren’t great as they were snapped rather ‘on the hoof’. The dark one shows a sneak peek in the centre background of a snowy Dublin Mountains. The flowers are my favourite woodland blooms: Wood Anemone, and they will soon carpet the park’s woodland floor with their pretty, nodding heads. The trail is some of the off-road stuff I threw in to make the run more interesting. A few hills in there too.

Here’s the route. Of course, there’s no point denying that 9.93km is mildly irksome. But never mind. It was a good run. Threw in some speed work too, on those loops in the middle section, which are a series of playing pitches. If you run around them, it’s bang on 1 kilometre. Handy for intervals, and also good, soft grass underfoot without any divots (or dog shit).

Sometimes you just have to get out there and run.

Also, honourable mention for Rob Cummins who runs WheelWorx down in Liffey Valley. It has to be the best triathlon shop around, and it’s run by Rob and Ais who do the hard yards too, so they know what they’re talking about.

Rob is a decent skin, and is always keen to offer advice and help, and for a first-time ironman, that’s gold-dust.

Cheers Rob. I solemnly do swear to set up that turbo trainer…