Despite the demands of work (both jobs) and family life, training has managed to keep its end up.

Last weekend saw another longish run, this time with Ciaran in the local park where I do most of my running. We clocked in over 23k in a nice steady time of around 2.26. 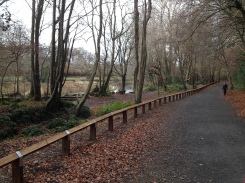 For some reason known only to the zany health and safety department in Fingal County Council, new timber barriers have appeared in the park in the last few months. No doubt at eye-watering expense. They look fine, really; it’s just that they are totally unnecessary. I’m not really sure what they are designed to do. The only thing I can think of is that on a gloomy evening, you could possibly go arse over tit if you ran into one, not least if you were jogging, or on a bike.

What they won’t stop are dogs, or kids. Or adults for that matter. They’re at that nice height where they will crush your shins or remove your kneecaps if you have the misfortune to come into contact with them.

If we had dramatic gullies and cliffs that folks regularly but accidentally threw themselves off, then perhaps I could understand the need for some form of physical protection against our own stupidity. But here in St. Catherine’s, it’s a relatively benign environment. As most of you know, Ireland is remarkably devoid of anything sinister by way of savage wild animals or irritating plants. (For the botanically-minded out there, no doubt you have already compiled a list of specimens that might include obvious problem plants such as nettles and brambles. And then there are the more ‘interesting’ ones, like Giant Hogweed, Monkshood and Deadly Nightshade).

But overall, your greatest danger in the park might be tripping over your own runners. If you are lucky enough to see a fox or a badger, rest assured they have spotted you first and will give you a wide berth.

Anyway, that’s enough ranting/rambling about the barriers. It just seems a shame that the local authority keep ‘tidying up’ the woodland. Just leave it alone, please. It’s fine they way it is.

During the week, gym sessions continued, as did the running. A recovery run on the Sunday, followed by three more runs on Tuesday, Wednesday and Thursday. The mid-week run turned into a fartlek and pace session, mainly because I looked at the schedule and it said ‘hills’ and I said ‘fuck you’. Or something like that.

This is what fartlek and pace looks like, on my watch anyway. It’s not an official training method, but it was the best I could do. Sort of reminds me of a row of ancient megalodon teeth, when you see it as the graph sees it.

Yesterday, being Saturday, and with a busy day today, I managed 18k in the park. I could venture no further as I was on call, and so the map of the run looks like a kid’s doodle with a red pen. I can’t say it was the most enjoyable run ever, but it was done, and that’s the main thing. I didn’t have any company, so I brought my little radio, and listened to that instead.

Today is a memorial football game, and I have played it for the last few years. It’s on a full size astro pitch, and it really takes a toll on 49-year-old ankles, knees and groins. And to top it all off, we then head out for our fireman’s Christmas do later this evening.

I rather suspect I may be skipping gym on Monday morning…

Be safe out there, and enjoy your training, whatever and wherever it may be.