Pace. The final frontier. These are the voyages of… feck, sorry; that’s a different story altogether.

But having said that, pace is often a strange new world where runners boldly go. Or sometimes not. Or other times, by accident. There are days when you just feel lighter than air, and you reckon you could not only take on the world, but run around it several times into the bargain.

There are other days where you just feel like a bag of shit and no amount of running is going to cure that feeling.

Pace is an issue we have explored here before. It’s just another word for speed, but speed can suggest other things, such as, well… speed, primarily, and pace is not really about speed, it’s about knowing how fast you can go, and for how long. And this becomes ever more important the longer your run is.

If the question is this: is it better to run a reasonably decent race with a small reserve in the tank for a sprint finish (who doesn’t want to look spiffing crossing the finish line?), or is it better to try and up the pace throughout and fall across the finish line, exhausted? The answer is, of course, to be Mo Farah, but given that is not a realitic option, then for better times, you should aim to up your pace throughout, and forego the grandstand finish.

So, maybe let’s step back a bit. Back up the truck. Let the hare sit.

Yesterday, I headed down to Waterford for the half marathon. It is a popular and well-run (no pun intended) event, and the woolly hats have become rather famous amongst the running community. I earned mine last year when Ciaran and I took part. And here is the link to last year’s epic race report, because we like to look after our readers here at unironedman. Ya lazy bums.

Had I known in advance the sort of build-up I would have for this year’s event, I probably wouldn’t have signed up. This time of year is usually busy, as regards the desk job, and this year has been very busy, with lots of deadlines. And the fire brigade is already past its busiest ever year too, with another potentially busy month ahead. And then one by one my normal running companions fell at the all-important hurdle of registration, and missed the deadline. Waterford always sells out. So I would be travelling, and running, on my own.

Then last week, in the teeth of Storm Diana, my Dad went out to open the gates for my Mum, and the high winds caught one of the heavy wooden gates and knocked him onto the pavement outside, giving him many nasty cuts and scrapes, and worst of all, a broken hip. We didn’t even know this ’til he got to the hospital. So the last few days have been trips into see him in the hospital. In the last few years, my Dad has been through the wars. A broken femur first, then a stroke, followed by a fall due to that stroke, and now a broken hip. And all have landed him in Connolly Hospital. I’m getting quite used to the journey over there now…

He’s had the op (the hip-op, and yes, we’ve been making some pretty poor jokes at his expense on that one) and is comfortable, but of course, when you’re in a hospital, you’re never really that comfortable. A long road lies ahead of physio and recuperation, and that in itself will be a challenge. Let’s just say I inherited my stubborn streak from him.

And then to top it all off, the race coincided with the Christmas night out for the fire station crew. Which meant getting up at 6am, driving to Waterford (about 160km), running the race, driving straight back in time for clay-pigeon shooting, and then on for dinner and some drinks. It was always going to be a long day…

Anyway, mustn’t grumble. With my Dad in the hospital, my mind was not really on running, and perhaps that’s no bad thing sometimes. I was up early and made good time, which meant a parking spot close to the Waterford IT campus where the changing rooms and start line are to be found.

I had a quick look at the 1:30 pace sign. I had toyed with the idea of giving it a go. Hence all the blather at the start of this piece about pace. My previous best for a half was here, last year, when I did a 1.40:15. But sure you know that, having read the race report 😉

To get in under 1.30 was probably not an option, realistically. It would mean an average pace of 4:16, and that would have meant a pace faster than the recent 10k at Clane, when I took a few minutes off my 10k PB time, and dipped under the 44 minute-mark. So was going faster for over twice as long an option? Probably not. Could trying and failing see you blow up spectacularly, and lose the opportunity to beat last year’s time, and get in under 1.40? Probably.

I wandered down to the campus to change, and soak up the atmosphere. I was early, and the mechanics of a large race were slowly taking shape: the pallets of water, the boxes of bananas, the racks of medals – all of the pieces of big race events were being carefully manoeuvred into place. 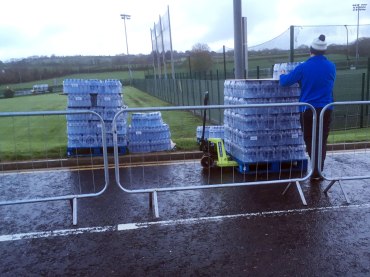 I met a couple of runners from Leixlip (good ones, too) and we had a chat about the course. They were new to Waterford, so it was good to able to point out a few things. It’s what you might call a ‘lumpy’ journey. Lots of ups and downs. You are finishing only a hundred yards or so from the start, so your overall altitude gain/loss is zero. But as any runner knows, you don’t get back on the downhill what you lose on the uphill.

I positioned myself inbetween the 1.30 and 1.40 pacers, and figured if I could finish in roughly the same way, I would be happy. The first few k are tricky enough as the crowd thins out. I kept the 1.40 bunch behind me, and as each kilometre ticked away, I tried to put some more distance between us. By the time we moved away from the industrial areas and housing estates, and into the country, I could no longer see them behind me. Not that I was feeling in any way comfortable. Compared to last year when I had felt rather surprised and pleased at the constant pace I was keeping, this time around, I felt a little sluggish. Heavy of leg, and with a constant stitch. I can normally get rid of stitches with some deep breathing, but these just refused to go away, just like the low-level headache I had been carrying around for the last few days. Stress-induced, no doubt.

Still, nothing for it but to keep running. The hills were kicking the shit out of me, and making a mess of the pace. Once I was ahead of the 1.40, I figured that was okay. As the race unwound, more hills and detours arrived. These nearly did for me last year; there’s a point around mile 10 where you arrive back out onto the busy distributor ring roads like the ones at the start, and you can fall into the trap of thinking you are nearly home. You are not.

Now it was dig-in time. With about a mile to go, on a long straight, there is a double-back section, and as I went one way, I passed the 1.40 pace group going the other way. Hard to judge the distance, or time. A minute? Maybe more?

Either way, no time to dally. Head down, and push to the finish. This time last year, I was really flying, trying to get in under 1.40. Now, I was going to break that with a little to spare. In the end, over the line in 1.38:10, and over 2 minutes off last year’s time. But in comparison to last year, I felt fairly beaten up. Pace, amongst other things, will do that to you.

Very happy with that indeed. 494th place overall out of 2,343, and 27th in my age category of over-50 male. My average pace was 4:39/km, and that really is not bad at all. Okay, I was hoping to go a little better, I admit. There may not be too many opportunities to give the half a really good rattle, though I appreciate that sounds rather gloomy and defeatist. But we’ll see. When you graph time and pace, the line is not a steady curve upwards. It tips along at a nice flattish line as you jog along at one kilometre every six minutes. This pace you can probably do for a few hours. So. flat line. Increase that up to five minutes, and suddenly things are different. The line starts to curve up. Another 30 seconds, and the line starts to look very steep indeed. 15 more seconds? It’s getting close to vertical. And at 4 minutes, I’m maxed out. That varies for everyone, of course. Literally, YMMV, to use the internet varnacular.

But to you have to be able to judge that point on the curve each time you toe the start line. You can, of course, just go for broke. Or have a good day at the office. And sometimes a bad day. But generally-speaking, you probably have an idea roughly where you are on the scale. After that, you just have to get on with it. 🙂

The two Leixlip runners I met had a great day of it. Both PB’d, and one in particular (Jan) placed fourth overall in the open female category with 1.26:11. Hell of a run. I too had to run, but this time, back home for a quick shower and out the door for some shooting. 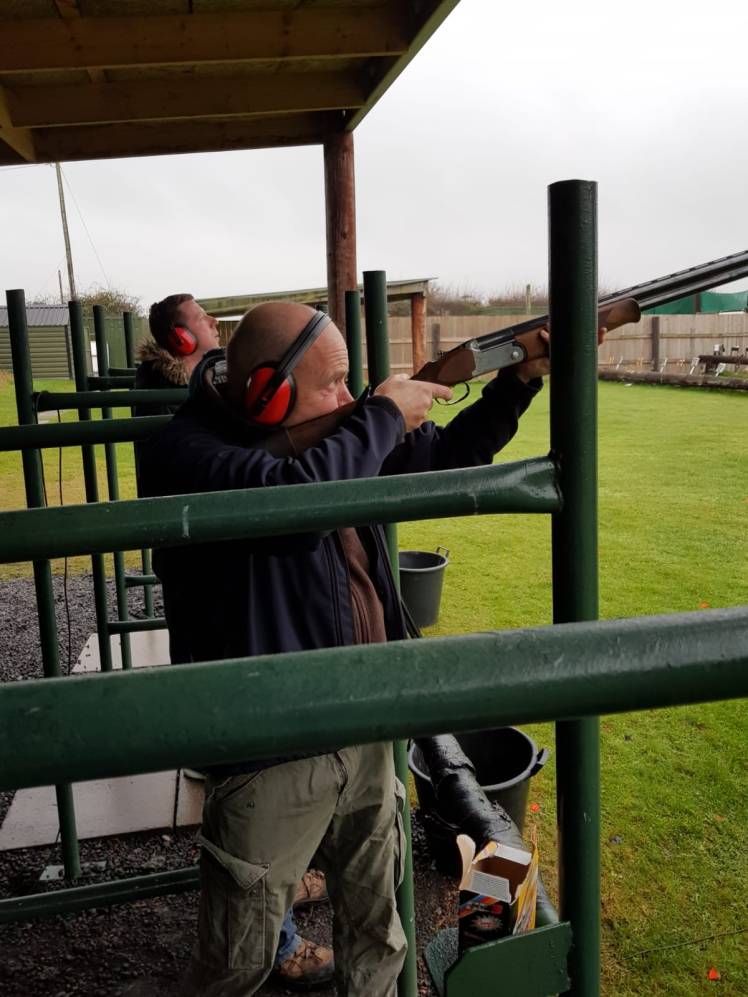 I’m not sure I would have let me loose with a shotgun after the week I had had, but it turns out I can actually hit a few clays. We followed that later with a nice meal with the crew, and then on for a few drinks. By half eleven, I was fading a bit, and took the opportunity of a lift home with a non-drinking buddy, and left the younger lads to it.

A long day. But a good one. Thanks again, Waterford, for putting on a great event. Once more, I managed to miss the famous ‘blaa’ bun at the end, so one year I’ll do the run, and have the bun. Until then…

2 thoughts on “Waterford AC Half Marathon”