Our concept of time is fluid in comparison to the reality of the stuff. Atomic clocks see to that. And you cannot escape time now in any case; we carry it everywhere we go in this modern world; most likely on our phones, although occasionally you might see an old-fashioned time piece strapped to someone’s wrist.

Though it’s more likely to be a Garmin. So not just time, but time and space. Though not quite a TARDIS. Yet.

So even though time itself is pretty much nailed to the floor, how we experience it is another thing entirely. Trying to break a four hour marathon? Still two miles out with 3.45 on the clock? Those fifteen minutes may feel like hell, but they’ll also whip past. Stuck 30 miles from a home with a puncture and no spare? Lift on the way, but it will be an hour? That’s a very long hour.

How to speed up time? All you can do is manage your perception. Best way to make the kettle boil faster is to go and do something else that will take about five minutes. Then you’re racing the clock, not watching it. Slowing it down might be a little trickier.

Anyway, this ain’t no TED talk. And I ain’t no physicist.

Monday was a piss poor day, but then I had to do a training day in the brigade which involved chemical suits and looking like an idiot (in that order), and then Pilates was cancelled, so it turned into an enforced rest day.

Tuesday was a little better as we got out into the Park and trails and clocked up a reasonable 14.6k in about 1:27 for an average of 10km/h on the money. A sort of bitty run as I had the phone with me (SmartRunner app) and it kept binging with demanding texts. Plus I took a good few photos.

The Mastodon (or Auroch; I can’t decide which) is still lording it over the bend of the river in the Park. No doubt one day it’s horns will fall foul to evil predators (or health and safety nuts).

The run took in as many paths as possible without overlapping too much. This involved a mix of fairly definite ‘off-road’ trails, muddy with Monday’s rain, hard pack paths, and the more traditional tarmac affairs, with some grass verges for good measure.

The pine plantation before the woods proper is known colloquially as Badger Wood, though needless to say there are plenty of setts in the Park and none of them are found in this patch of spruce.

Out past the woods there is open scrub, and all of last year we delighted in the mass of Teasel that grew up following the soil disturbance from drainage works. 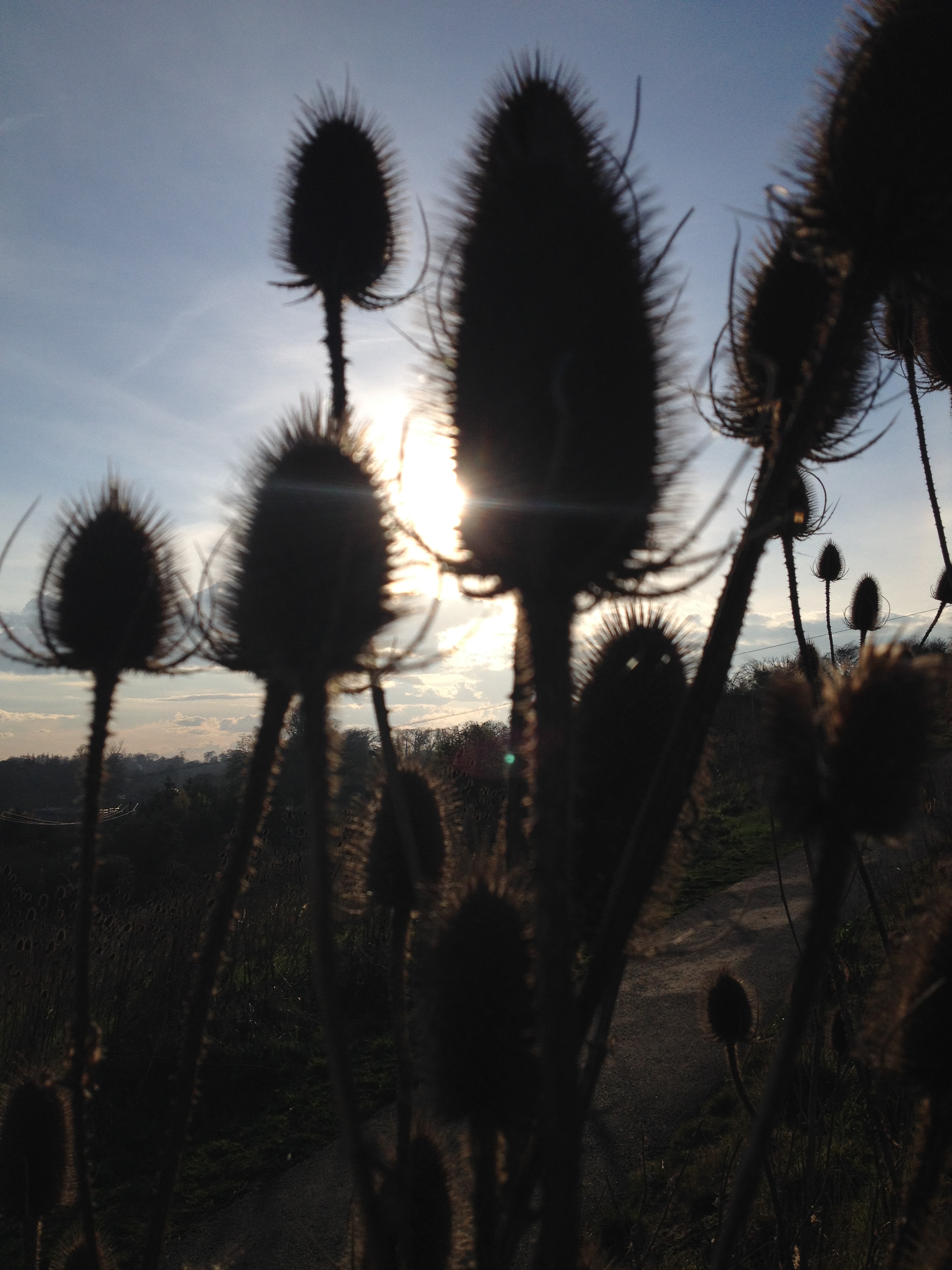 This year, the Goldfinches are now capitalising on the seed heads. Up beyond the path and past the dog run, and the daffodils and cherry blossoms make fine neighbours.

This is the formal part of the Park, and I usually leave this to the end of the run, as it isn’t that exciting, despite the floral offerings.

Wednesday: The day started with a bang. We were called out around four in the morning to help out with this.

The call took a good few hours, and I walked back in the door at about the time I was planning to get up for the early swim, so I had a quick bite, jumped in the car, and headed for the pool.

The first ten or so lengths are always easy enough to get the body going. Not that I go at any great pace thereafter, I should add. I planned to do 100 lengths and see how I felt. The only real thing to think about when swimming (well, for me anyway), is how many laps have I done? I do have a little doohicky that fits on my thumb, but you have to remember to push a little button at each end, which is not the easiest thing to do, and then neurosis insists you check that the little display has indeed ticked over… after a while you leave it in the swim bag. I don’t have any other gadgets, nor do I plan to get any. The best I can hope for is a pair of swimming togs that aren’t hanging down around my arse; the chlorine seems to eat the fabric, regardless of how much you rinse them, and the elastic gives up the ghost after a few months.

No doubt the pros have a way of dealing with this, though I suspect the answer may be sponsorship… All told, I managed 3k, which is the furthest I have swam in one sitting (or swimming, or whatever…). Took about an hour and twenty, so no speed records were broken this morning. But good to get to that figure.

Most of us don’t own one of these, so time travel is not really an option.

What is interesting is the link we make between the event happening in the present, and the one we have planned for in the future.

So, for example. You’re in the pool. You’re freestyling up and down the lane in preparation for the big race ahead. You cast your mind forwards. Suddenly you are there. The water is swirling around your swim cap; the athletes each side of you are trying to get past. You pop your head up to sight off into the distance, looking for the big yellow buoy. But there is no buoy. Just the end wall of the pool. But you feel like you have thrown out a ‘time traveling’ feeler; a wormhole of your very own making, connecting to an event that has yet to happen. And that ‘vision’ becomes a pin you have dropped in your very own mind map.

And the odd thing is that when it comes to race day, the chances are that you will suddenly experience that same moment – a moment in time – and your synapses give a little lurch as you make that connection back to the pool training session six months previous.

In a way, you feel as if you have time-traveled. In both directions.

Alas, in reality, it’s just our minds playing tricks. It’s good old déjà vu. (I wonder how the French experience déjà vu?). We’ve already been there, so we can imagine what it might be like. And when that imagined event actually happens the way we think it will, it reinforces that feeling.

And yet. There is still an odd feeling when it happens. It still feels like the remnants of a once-known but long-forgotten trait. They say when you are about to die in some dramatic fashion (falling from a roof, for example), your life ‘flashes before your eyes’. Well, science has an answer for this too. The phenomenon is explained by the rational and quick-thinking brain rapidly scanning through your life’s key moments to see if there’s any useful information in there that might help in this current rather unfortunate turn of events. Chances are this is the first (and possibly) last time you have fallen off a roof, so this quick flip through your life’s Rolodex may come up blank. Well, not blank; lots of images of scraped knees and upturned trikes, first kisses, weddings, births (usually the other way around in Ireland) and a variety of other key moments, all presented in a scratchy sort of Kodachrome style, favoured by movie directors.

I like to think there is some connection made between these events we have experienced and the ones that are yet to come. Though the rational bit of my brain says otherwise.

And no, I have not been smoking.

*  This word is a neologism. Read more here. I was going to try and fool the erudite readers that I chose this word specifically in keeping with the tricksy concept of time travel, and the linking of two different things. But I didn’t in the end…

And for the men out there, check out this link  and then check your testicles.

One thought on “The fine art of time travel”