A MUGGY WEEK DRAWS TO A CLOSE WITH AN INJURY SCARE RECEDING, A POOR WEEK’S TRAINING, BUT AT LEAST SOME NEW SHOES…

After the ankle roll on Wednesday, I decided it was time to invest in some new runners. In fairness to my old Adidas Energy Boost, they have been great, and there are still plenty of miles in them. Nor were they responsible particularly for my near-miss out trail running. But overall, they have got a lot on the clock, and it was time to introduce a new pair into the system; certainly, now was the time to get new shoes if I am going to bed them in before the race in August. Yeah. Luxury problems.

I took two rest days, on Thursday and Friday. Thursday was a busy day as it happened. A lot on in work, plus three call-outs in the station, plus 2 hours of drill. And it was an early start on Friday morning as I was off to Dublin for a work thing. Time off is tricky at the moment with one off sick and another away on holidays. 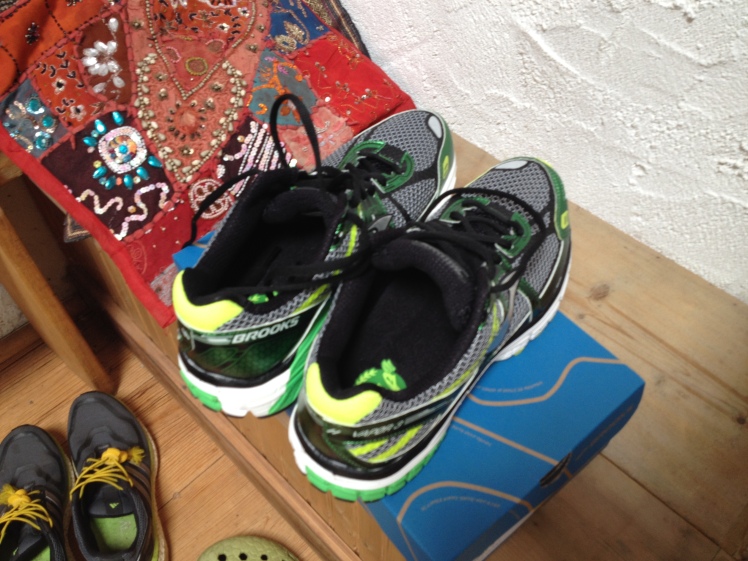 On Saturday, I took the new shoes out for a spin. They are Brooks Vapor 3. A pretty-much entry-level offering from a well-known shoe company. Sold as a stability runner and good for folks with medium arches and tendency to over-pronate. Well, that’s the sales blurb anyway. They certainly do feel more solid underfoot than the Adidas, but then I have not had a pair like the Energy Boost before; not only is the sole quite different with its ‘aerobead’ looking texture, but the upper is light and stretchy and snug like a glove.

The run was odd for one reason: on Wednesday, I did 14k in 1.20:56. I did a similar run on Saturday (slightly different route) and clocked up 14k in exactly the same time. Some precision running. The overall pace is still a few seconds out from marathon pace but happy enough.

Sunday, and a run with Mark. A decent 5 odd k in the park, followed by the obligatory hot chocolate (though it was too warm really).

Finished off the week’s training with an hour on the gym bike; did about 32 and a bit k. I was supposed to head out on the bike for a decent spin but a call-out put a stop to it. Will need to get back on track next week.