As any Irish person knows, Colette was the lady in charge of VT on the original Late Late Show with Gay Byrne. When Uncle Gaybo said “roll it there, Colette” we were about to get a clip of video. Ah those heady days.

Anyway. That’s not really got anything to do with, em, anything, really other than I rolled my left ankle yesterday.

I was out trail running in the local woods, and I generally pay close attention to the paths as they have a few gnarly bits sticking out to catch the unwary runner. Well, obviously I wasn’t paying enough attention, and I rolled it painfully and had to stop for a breather. For a brief moment, the whole year went up in smoke. No more training. No ironman.

But then the pain eased and I was able to continue with my run.

I did 14k in all, at the sort of pace I would hope to do the marathon in; 5.47. Though that wouldn’t get you under the four hour mark. 5.41 is more what you need to be doing. I guess I’ll stay off the trails for a while. Pity; they were nice underfoot, and sure beat the hell out of the tarmac paths. Ironic, indeed, to use the trails to try and ‘save’ the knees only to go and injure your ankle…

I did 3.5k in the pool yesterday, and I may stay off my feet more than usual this week, and rest up that ankle. I have done ligament and bone damage to that ankle before, back at the end of 2008. And I suspect they are never quite the same again. The pool and bike will more than suffice.

Not so with collar bones though. This is my left collar bone from about six years ago. Solid as a rock these days, albeit a bit lumpy. Bodies, eh… wonderful things! 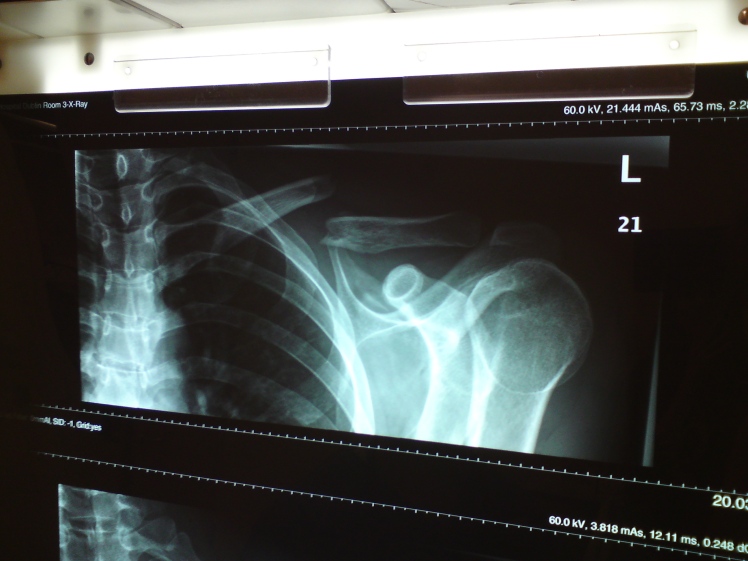