“Two roads diverged in a yellow wood,
And sorry I could not travel both
And be one traveler, long I stood
And looked down one as far as I could
To where it bent in the undergrowth”

The Road Not Taken
Robert Frost

This short post is an all-too-brief homage to my local running spot, St. Catherine’s Park. I must have thousands of photos of this place, going way back to the good old days when all you had was a roll of film, so you just had to make the best of your 24 shots, and woe betide anyone who took a photo that was blurry or had a thumb across the lens.

Needless to say, the kind folks in the developing labs would take great delight in putting little stickers over your pitiful attempts, just in case you didn’t notice. And with every fat envelope of possibilities handed over at the chemist counter, a new film was popped into the paper bag… benign drug-pushers, if you will… enough to get you hooked and keep you going. Little did we know it was the prints were the money was, not the film. Still, despite all that free stuff, we seemed to have NOT all turned into Lord Lichfield.

Now, of course, everything is digital, so most of the magic from our local park is buried on a drive in a blizzard of ones and zeros. I plan to invest in a decent quality colour printer again, and get some of these onto the walls. I suspect we are running out of wall space too. Better hurry. Do you know what MTBF stands for? It’s good-old computer jargon. Here’s the blurb from online:

In more prosaic terms, your hard drive is going to f*ck up. Maybe not today, maybe tomorrow, but soon, and for the rest of your… okay, sorry, I was channeling my inner Bogart there. Just assume your computer WILL let you down one day, and plan accordingly. This has been a public service broadcast for the optimistic, unwilling and insane. You’re welcome.

Anyway, a couple of pics here to whet the appetite (not the one of me; the other two). Around this time of year, the Beech donate their leaves to the paths to create a pleasing copper patina, overlaying the packed earth and grit underfoot. It’s lovely to run on, though at night-time, I can tell you entrained air sucks along a handful of these desiccated fallen comrades, and you will convince yourself that you are being followed. And the worst part is that they are RIGHT BEHIND YOU! When you stop, they stop; when you speed up, so do they. And when you shine your head torch into the darkest depths of the woods, you convince yourself you won’t see anything staring back, only for a badger to look up from its nocturnal shufflings, its eyes two beady spots, swaying in the inky black… oh yes, I love night-running! You can get some good times out there, in the dark, and by that I mean sweaty, nervy speedy times!

Monday’s run was the recovery kind; by now, a standard 10k. No need to check the programme tacked to the kitchen door. Such is the ubiquity of this route on my schedule, I could run it with my eyes closed… well, actually that might be an interesting option one day. With the fine weather and iPhone on hand (since getting caught out a few times on runs with fire service call-outs I have taken to wearing it in an arm pouch) I took the opportunity to get a few pics of the impending ‘fall’ of Autumn.

St. Catherine’s has vestiges of ancient woodland. This makes it something of a special oasis of green on the edge of our capital. There are a few botanical indicators of its age, despite the presence of so many Beech, which are not considered a native Irish tree. And as with many Irish woodlands, it suffers with other infiltrators too, such as Cherry Laurel. And with the Liffey on hand, many others join in the inward migration. Bamboo, for one. And Himalayan Balsam, of course, and last year, the rather sinister Monkshood, also known as Wolf’s Bane. Not planted, but washed out of someone’s garden, most likely. But for all that, there is plenty of evidence to suggest that our little wood has history stretching back to the time of the Vikings and Normans and beyond. There is more here to tell, but perhaps it needs a longer post to do it justice.

Tuesday was Speed Work day, and a reminder that my other job in the brigade is never far away. Halfway through laps of the pitches, doing intervals at a reasonable pace, the beeper went off. With the presence of mind that only an anal retentive can attain, I remembered to hit the Garmin as I rounded the last corner into the station. I made it in time too. And looking back later, the watch reckons my top speed was 4:45 min/miles (2:57 min/km). Not sure how accurate that is, but considering I WASN’T actually hijacking cars this time, that’s not a bad pace at all.

My groins were under protest afterwards. In fact, we are still not really on speaking terms. But overall, no real harm done, other than the session was cut short – only about 7k done, when it should have done around 11 or 12. Ho hum.

The following day was a recovery run, and I took the description literally. I did a nice easy stretch in the park at marathon pace; the watch says 6.66k. As it’s a route I have done many times, it’s a distance I have seen before, so it doesn’t faze me anymore (though not being religious, a numerologist or kabalistic, I guess it shouldn’t anyway).

Today is Thursday, and there is a tempo run to be tackled later. For the last few weeks, I have been keeping a head cold at bay, in much the same way your older brother would stop you from punching him by planting his hand on your head. I am hoping that, in a similar fashion (after many wild swings, you would simply be swatted away, eyes streaming, to be sent scuttling to mother for consolation), I too will be able to ride out this mild irritation without any consequences.

I was hoping it would have come and gone by now, but it seems to be hanging around. I suppose all that training, whilst making you strong of limb, probably puts the immune system under a bit of pressure. 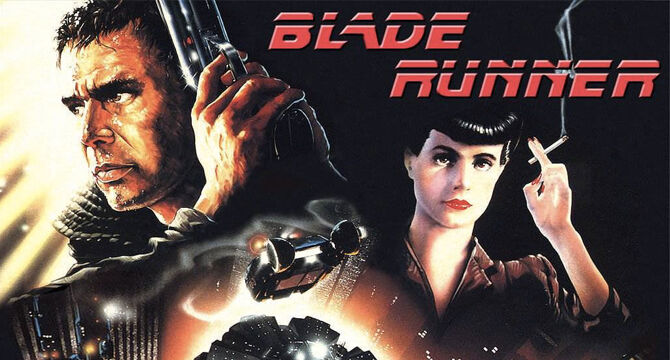 To get ready for Bladerunner 2049, we watched the director’s cut of the original last night. S had never seen the first outing of Ridley Scott’s epic take on Philip K Dick’s sci-fi classic, so it had to be done. Took the night off from the station, cracked open a tub of ice cream, and relived my student days.

For the nerds, it was the non-voiceover version. But it holds up well after all these years, unlike many other science fiction classics. I suppose we should be thankful that the vision of 2019 seems a long way off, in much the same way as 1984 came and went without everyone conversing in Orwellian doublespeak. Although your mileage may vary on that, granted.

But look how young Harrison Ford is! And how lush the Vangelis score! Rutger Hauer has, in a circuitous kind of way, achieved the immortality that Roy Batty wished for. His character is forever watching attack ships on fire off the shoulder of Orion; c-beams glittering near the Tannhäuser Gate…

Yes, it is a cult classic, and it remains to be seen if the new one matches up. Reports to date suggest it does. I am hoping to see it this weekend.