We have been suffering a heatwave here in Ireland. As you know, here at unironedman, we like to do the research for you, so you don’t have to. Ya lazy frickin’ bums.

An official Irish heatwave kicks in when you have five consecutive days where the temperature is five degrees (or more) above the average. By some standards, when you consider what constitutes ‘hot’ around Ireland, then the term heatwave might be considered by some to be a misnomer.

Well, the main thing for dear old Emerald Ireland is that we don’t do too well without water; certainly not the things that really need it, such as agriculture and tourism, to name but a few (not forgetting the wildlife). We have a poor water infrastructure, and at least 40% of our treated water seems to vanish through leaky pipes.

And of course, we don’t really agree with the heat either, despite sterling efforts to the contrary. Most Irish folk are milk bottle-white, and when the sun comes out, it seems to stir something deep in our gene pool (we are, if you trace the roots back far enough, related to tribes from India, if you believe some research). This itch we must scratch causes to us to cast off all our clothes (or as many as possible whilst remaining decent), and soak up as much harmful, UV-laden sunshine as possible, resulting in a rather drastic spot of epidermic redecorating. That’s to say, Daz blue-white to shocking lobster red. And all within the space of one afternoon.

Diehards push through the burn and keep going, on the basis that any tan is a good tan, and by god they are going to get it. Not least if it’s free. Liberal consumption of alcohol helps both the pain threshold and the length you can remain in the scorching sun. Roman Catholicism is chucked out the window in favour of sun-worship, and we place our bodies on the altar to be liberally toasted. The smell of scorched flesh is barely masked by the aroma of Ambre Solaire…

Okay, enough of that. It’s been hot here. And there is a drought. Streams are dry, reservoirs are at an all-time low, and there is a nationwide hosepipe ban, so logically, the best-seller in all the local German multiples and pound-stores is the paddling pool (on average, about 500 litres of water to fill, minimum). Allow me a little mildly racist self-deprecation by suggesting that this wouldn’t happen in Germany. Oh the delicious irony of it all.

Anyway, I figured I would break my own drought (groan; what an awful segue) by actually posting a blog. In fairness, it’s been so damn warm lately that it’s been hard to focus on anything work-related (i.e. anything requiring me to sit in front of the computer for more than the time it takes to check mail). This time of year is generally slow in the graphics business, and the fire service has been out the door, to use that colloquialism.

A quick glance at the Garmin page proves what I knew anyway; there has not been too much running of late. We have joined a new leisure centre (why do they use the word ‘leisure’? Most of the folk I see in there seem to be going out of their way to avoid the possibility). It has not one but two pools; the luxury! Chances of a decent swim have increased many times over the old pool at Carton. So we have had a few swims lately, and I got the bike out over the weekend for an easy spin of about 36k to see Arthur. And by Arthur, I mean the famous brewer, Arthur Guinness, who is buried in Oughterard Cemetery about 16k south-west of Leixlip. It’s a nice spin, especially when you take in the towpaths of the Grand Canal. Whilst the average speed was a modest 26k and change, the top speed nearly hit 70… 68.9k coming down Boston Hill. Love that hill! Just needed another hundred yards of steep stuff. Next time… 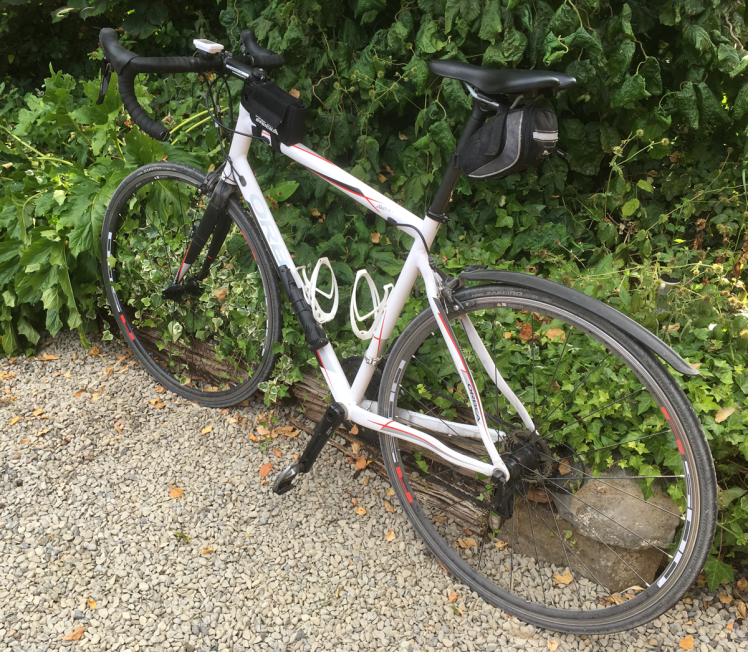 And yesterday, S and I drove up to Cavan to check out Lough Ramor for a swim. We made a little BBQ afterwards too.

The location was suggested to us in a book on outdoor swimming by Maureen McCoy and Paul McCambridge called Wild Swimming in Ireland. And for those interested in other possibilities, check out http://www.outdoorswimming.ie/, though you will note that inland options are thin on the ground, if that’s not a bad turn of phrase!

The spot of Lough Ramor is an official campsite, so yesterday it was very busy. The lake has an average depth of about 10 feet, so just getting enough water to safely launch yourself is your first challenge. Your close second are the beds of freshwater mussels underfoot. These will catch out the unwary wader and give you some nasty little nicks. S and I had a nice collection of about a dozen, and we raided the first aid box for plasters once we had dried down.

I swam out to the nearest little island, for a challenge. All told, probably less than a kilometre there and back, but fun to do. Then it was burgers and buns to re-energise.

And then last night, before we lost the light,  I took the legs out for a gallop in the park, with the main aim of keeping each kilometre below the five minute mark. Mission accomplished too, with 10k done in 48:19 for an average pace of 4:50 min/k. Other interesting runs include a nice jog out by Raven’s Point, on Curracloe Beach in Wexford, with Fiona, a family friend. 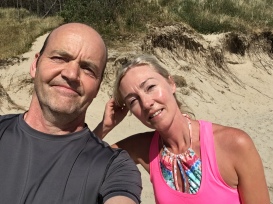 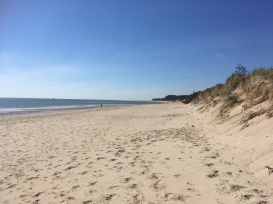 And not forgetting the Great Nettle Run a few weeks ago when I took one of the trails down near the Liffey, tripped on a root, veered to avoid a single nettle stem and careered into a bed of nettles and got stung from the side of my face down my arms to my legs. Oh yes, how we suffer for our art.

Speaking of which (well, I was, anyway), I just thought I’d share this little gem with you. After last year’s Dublin Marathon, the toenail on the second toe of the right foot had become a rather fetching/alarming (delete as appropriate) shade of purple. The nail clung on for some time. I think the Barrow Way run did for it. I had caught it a few times putting on socks, and it was lifting more than a nail should. Well, it’s gone now, and here is a nifty graphic just to show you where we’re at currently, vis-à-vis the nail situation. Pedicurists should look away now…

And so there we have it. Marathon training kicks in again in a few days. It really doesn’t seem that long ago when we did all this madness… still; has to be done. There will be a triathlon and a long open water swim to break up the monotony of constant running. And I should get my running buddy back too, once his post-op recuperation has concluded.

And also a photo of a pair of ponies which I have passed numerous times of late as I tip up to my local lake of an evening for a cooling dip.

Enjoy your running, wherever you may be. Not forgetting cycling and swimming, and indeed, whatever outdoor pursuit takes your fancy. Be safe. No doubt next time we speak, normal service will have resumed, and it will be business as usual. The business of rain, of course 😉

5 thoughts on “A drought of sorts”