Another week has passed, and another week closer to the Dublin Marathon at the end of October. Training has been going well. A few breaks here and there for holidays, but then stoppages can occur at any time…

We have just had one of the sunniest Summers on record, so rain has not been an issue for training. Mark and I were casting our minds back through the year, and we couldn’t recall any runs postponed due to the weather. That will change now, though, as we head into the stormy season. And I say ‘storm season’ with the knowledge that what we get here are, by and large, the tail-ends of hurricanes that our American cousins have experienced first-hand. Hand-me-down storms, if you will.

And the fire station has not been that busy of late, so very few of my runs have been cut short with the alerter. So needless to say, like buses coming along together, that was bound to change.

On Saturday, I was volunteering to do water rescue for the Liffey Descent. I got this gig through the fire service, and it was a fun day out, and a way of meeting some new people and having a new experience. We do water rescue in the brigade, but very often it’s a matter of recovery, not rescue.

We were stationed at the Sluice in Lucan, which was perfect for me, as I know this part of the Liffey well. There was a good crew of us (most of the team were from Lough Neagh Rescue; a sound bunch of lads), and more than enough, as it turned out, to cope with the demands. The river level was at an all-time low for this time of year, and in particular for the Descent. Normally the ESB would be releasing between 3 and 4 megs of water (30 to 40 tonnes of water per second, or cubic metres per second, also known as cumecs) on top of the normal flow, but this year, with some counties still on water rationing and hose-pipe bans, news that the ESB were throwing water ‘down the drain’ for a canoe race might not have gone down too well. I think they released 1 meg but it made no difference.

Our job was simple enough. We were positioned downstream of the sluice. This was the only section of the weir that was passable if you wanted to stay in the boat and not have to do a portage. Normally, in flood, the entire weir is topped, and boats can opt to shoot it on the right, for a slightly safer and slower route, or take the plunge and go down the sluice. This year, there was no choice, as the weir was dry.

With so little water, there was little energy involved, and we only had three capsizes to deal with. It was a relatively simple task to get the boats away from the flow, empty them out, and get the paddlers on their way again. In other years, this one small section can claim dozens of descenters in the space of a few minutes, especially in the later stages of the race when the serious paddlers have gone through.

Speaking of which, above is the winner of the K1 category, Barry Watkins. Barry is a local man, and a neighbour of mine. His dad is also a winner in times past, so there’s pedigree there for sure.

Once the sweepers had paddled through, we headed down to the finish for some food, and to watch the medal ceremony. ‘Met quite a few people I know down there, and in one of the doubles categories, there were three brothers on the podium – first, second and third – so there must have been some rivalry on the water that afternoon.

I still needed to get my run in. It was getting a little gloomy out, so I only did 10k of the 13k on the programme. The next day was a 25k long run, and my mate Mark was away, so I would be running solo. I faffed around ’til the afternoon, before finally getting all the gear on and heading out the door.

A few k into the run and something flew into my gob. Well, I managed to half-bite down on it before it went all the way in, which is probably why it decided to sting me. My bottom lip started to tingle, and then swell up. I am not allergic to stings, thankfully, so I decided to press on. About 16k in, the alerter went off, and the handy 6:10 pace of the long run turned into a 4 minute per k haul back to the station.

By the time I finished up in the station, I decided to call it a day. I’m not a believer in fate per se, but there did seem to be something telling me to quit the running for this week. So I did. I’m happy enough. S and I have managed to hit the pool every morning from Monday to Friday this week, and I’ve done a quick kilometre each time, so if there’s a deficit on the road, I feel like I’ve compensated in the pool. 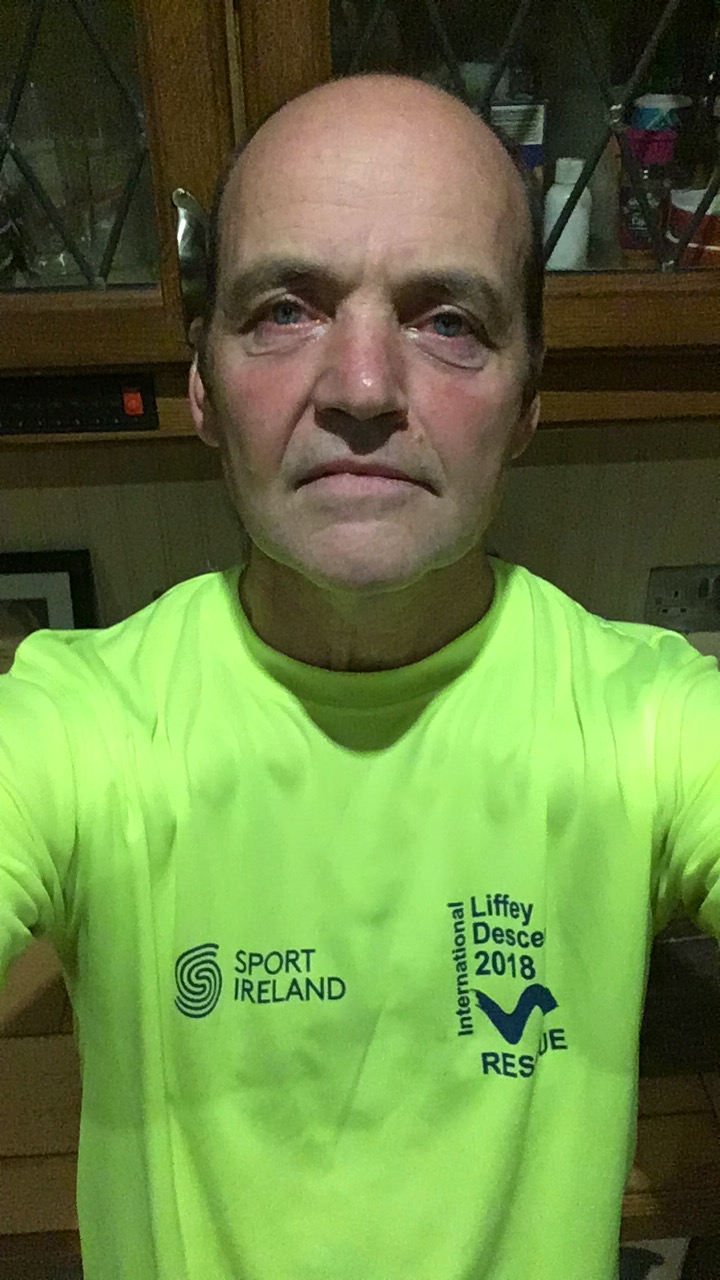 And I have yet another T shirt to add to the collection. Behind every runner is a drawer stuffed full of race Ts…

And finally, as most of the running community will already know, the men’s marathon record was broken again this weekend. Eliud Kipchoge of Kenya broke his own record in Berlin, which now stands at 2.01:39. Eliud was the star atraction for Nike when they put together their ‘Breaking2′ project in Italy, in May of last year. He was shy of the seemingly impossible target by a mere 26 seconds. No doubt it will go one day, even if it is in conditions that are not recognised.

It’s hard to comprehend the pace required to do this. When you see these athletes loping along at marathon pace, it looks rather effortless, and, oddly enough, not all that fast. In reality, they are whipping along at under 3 minutes per kilometre. For any 5k runners out there, you know what sort of pace is required to get in under 20 minutes (4 minutes a kilometre) and, if you’re like me, you know how bloody hard that is. I still haven’t run under 20. Kipchoge was knocking out 5ks in around 14:30. And to rub it in, he did a negative split, running the second half faster than the first. It makes your eyes water just thinking about it. I know it helps to be about 5’ 5″ and weight about 56kg. And hail from Kenya. But that alone won’t do it. This is clearly the best marathon runner on the planet at the minute, bar none. And for good measure, he has a mile time of 3:50.4 and a 5k time of 12:46.53. So yeah, the guy can move!

Speaking after the race, he joked about reaching certain targets, and he came out with this quote, which I like. He reckons it’s an old Kenyan proverb: never chase two rabbits.

Though I have a sneaking suspicion that if he did, he’d catch them both…

3 thoughts on “A Sting in the Tail”