The original Run to the Hills was of course a classic Iron Maiden number, as I reveal my youthful, denim-clad days of yore when I had lots of hair and little sense. And now I have little hair, but still no sense (just thought I’d jump in there and make the gag before anyone else did).

‘Not long in the door from a recovery run on a Monday morning. Just a quick post and then back to work. The recovery run followed yesterday’s exertions in the Dublin Mountains.

The run was thanks to Jarlath of Grassroots who, in addition to running a very successful local keep fit club (a very poor description which does it no justice at all), also puts together a hill running session for anyone who wants to tag along. It very much fits in with the essence and ethos of Grassroots. In this case, you show up on a Sunday morning and car pool up to a location in the Dublin Mountains and take it from there. So yes, purely from a Trade Description Act point of view, we didn’t actually run to the hills…

I was made very welcome by the regulars. In no time at all from Leixlip you are at the entrance gates of the pine forest at Tibradden. I don’t know the area that well, but my Dad would, as he grew up not far from here in Ticknock.

We did a short muscle-loosener up and around Zipit. If you haven’t done any of this zip-lining, I can heartily recommend it. This is the same crowd that do Lough Key, and that has some fairly tickly moments!

Fully warmed up, Jarlath then took us across the stream and up into Cruagh for the first, more challenging loop. For a traditional kind of runner such as myself, hills are something you either avoid or make a point of doing as part of ‘hill work’, which generally means short interval sessions of low gradient speed work. The last time I recall doing this amount of sustained running uphill was at the start of the Burren Half Marathon which began with a straight 4km climb. But then this is hill running after all, so what do you expect! The one positive you can ease your troubled mind with as you slog up a hill, turn a corner and find yet more climbing is that basic topography demands that you must go downhill at some point to return from whence you came.

The weather was taking a break that morning. And by that I mean we were in a calm between what has been a succession of storms sweeping in from the Atlantic like the constant battering of punches from a heavyweight boxer. But if the alphabetical nomenclature is any judge, we are only at Storm Desmond. Plenty more letters to go! Still, for all the heavy rain and wind, the mountain was in good shape. It’s very popular with locals, and the route around Cruagh was busy enough with dog walkers and other joggers.

After the first loop, there was an option to return to the cars, but most chose to take on the second and more ‘off-road’ experience which was more of the classic romp amongst the pine needles, tree stumps and mud of a typical uphill pine forest of spruce and larch. And then Jarlath found a nice stream bed to run up; all granite boulders, silt and muddy pools. Once you sink into your first one, the rest are fine! 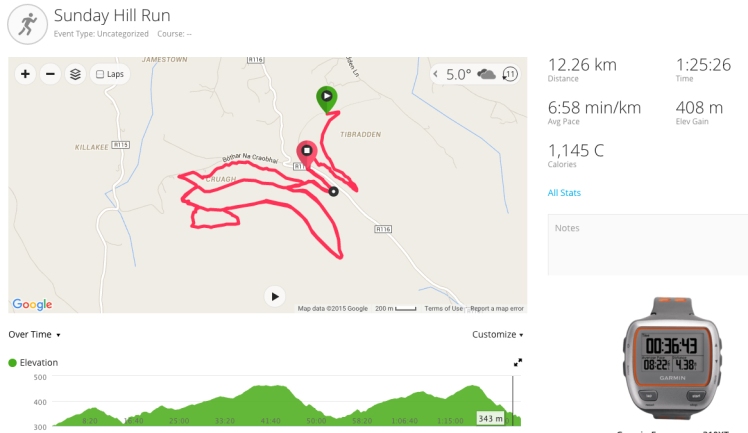 The above stats are from one of the runners who was using his Garmin (thanks for the info, Ivan). That short bottom loop was the hardest part. Jarlath led the way at every stage which allowed me to keep an eye on his running style and pick up some pointers on hill-running. One rather impressive thing is his ability to stay on the balls of his feet all the time. It’s something you might do sprinting, and it helps get you up hills, but over any distance, your average runner is a mid-strike or heel-strike person. Not so for Jarlath. I suspect you could tape two cherry tomatoes to the heels of his trail runners and retrieve them after 20k of hard hill running and they’d still be in perfect shape for a salad (though I concede you may not feel like them eating them at that point. And yes, I am referring to the tomatoes, not the runners).

This style of running is going to give you some serious calf definition, if you can maintain it. It’s certainly something to think about. For now, I am still trying to build in a few ‘chi’ pointers into my form, which I think will be beneficial in the long term, both from an economy and injury-avoidance point of view.

Overall, a fabulous experience with a great bunch of people. I’ll return again for sure, and Saoirse is keen to give it a go too. Having climbed Croagh Patrick with her, I suspect hills will present no real problem. Towards the end of that climb when I was really starting to struggle, she was still bounding across the scree like a mountain goat.

So this morning I took myself out on a route I would normally include as part of a cycle. I was dropping my car to my mate Ian for some more work (in an attempt to get it through the NCT) so I figured why not run back. I took the long but scenic route.

I headed out along the Celbridge Road towards Young’s Cross and took a left past the State Labs, and left agin at Stacumny. This brings you along Tubber Lane. The ditches to my left were initially choked with Hart’s-tongue Fern and bramble but as I made my way along the lane, the ditch suddenly transformed into a small river. I passed a farmer out checking the water levels; we’ve had so much rain in the past few weeks, it has nowhere to go but spill out over the land. The fields around seemed well-drained and had avoided the worst of it. One in particular made me do a double-take: it seemed to have a strange crop of grey cabbages, but on a second glance they turned out to be hundreds of pigeons, obviously nibbling away on whatever the farmer had planted.

At the end of Tubber Lane (I guess from the Irish tobar meaning well, which certainly today made sense, as there was a lot of water about), I turned right down past the golf club and in towards Lucan where I could access St. Catherine’s Park from the other end.

The weir had returned to more normal levels since my last run here a few evenings ago when the high water had swept across it, submerging it to the point where it was practically invisible.

I was tracking this route on my phone but when I returned home, I discovered it had paused at about 2.9kms in so I have no stats. No matter. I can do it again, I’m sure. Would be about 7 or 8 kms maybe.

Yesterday’s run also doubled-up as my contribution to another blogger’s plan to do a ‘virtual’ 10k. See here for more. I think I held up my end of the bargain. It’s a great idea – I hope it catches on.

P.S. A not particularly scientific observation on the after-effects of hill running: I feared I would suffer afterwards. I reckoned the legs would be, to use classic Irish parlance, in a jocker. But they weren’t. However, the core muscles were feeling it. No doubt all that bobbing, weaving and using your whole body to stay balanced gives you a greater workout than you would imagine. None of that will be news to hill-runners of course. But go easy on me. I’m a newbie 🙂

4 thoughts on “Run to the hills”