In a break with tradition, I’ll update the diary first.

Monday: (covered briefly in the last post) contained a short swim of about 1.25k, and then a late run in the park. The run was delayed as four different drivers had managed to get locked in behind the barrier in the park, and as I have access to the key, I was able to release them back into the wild, which required much faffing about. There is something in the back of my mind about delayed gratification here, but I can’t recall what it is, and to be honest, I don’t think I was really that pushed to go out in the first place. Yeah. Martyr to the cause. About 6.5k all told. One of those sessions where you are running and convincing yourself that, yeah, this is what it’s all about. It’s cold and wet, and I’m a double-plus hard bastard to be out training in this shit with my head torch on and every excuse in the world to be at home, watching telly with tea and biccies. Hardly Bear Grylls though…

Tuesday: half hour gym session, and stayed away from the weights as my back was still not in a good place, so stuck to the bike. Also that evening, I played a few songs at a local songwriters night. Good to get back out again and warble a few tunes. I play quite a bit, and write too, but have done precious few gigs for about ten years, since I joined the fire service.

Wednesday: 12.8k in the woods and paths, about 75 minutes all in. Average pace was about 10.2. It was a slog. Must still be feeling the effects of the weekend work. Truth be told, sitting on one’s arse all week in front of a computer does not a happy man make.

Thursday: up bright and early for the first swim of the day at 7.15. Conversation with Sandra at reception goes something like:

“Morning Declan. In for a workout?”

“You do know there is a class on now, so no swim for you ’til 8. Has that changed your mind?”

Well yes, indeed it had. No time to hang around, alas. Busy day at work, and short of crew. This was my window, and the window had just banged shut on my fingers. Ended up a forced rest day, as we had a family engagement that evening.

Friday: revenge of the swimming nerds. Managed to get down (again) for the early swim, and put in a decent shift (by my standards) for 2.5k, in about an hour. Assuming those figures are right (and I think they are), then this represents actual progress. This of course is good news, as swimming is not my forte, despite the fact that I usually enjoy it the most on a triathlon. I still need to swim the distance between now and August, just to satisfy my own mind that I can do 3.85k when it matters. Unlike marathon training, where athletes rarely if ever go over the distance until race day, I note that swimmers, including those training for triathlons, will regularly clock up more than 3.85k in the pool in a session. Of course, I can factor into this equation that these are decent triathletes, and I haven’t earned my stripes yet. But on the whole, a good stint.

Later that day, I did a short 5k trail run. Now, just to be clear, the park trails are by and large flat, with one or two decent uphill sections, but they are not by any stretch, mountains. For that, you need to head off to Dublin and Tibradden, the Pine Forest, Ticknock or Three Rock. Or further afield. I do want to get into trail running but for now, my local paths are fine; apart from the time required to get away up into the mountains (which is tricky with the roster), there is also the possibility of injury, and we don’t want that. Oh no.

Saturday: the met office suggested that anyone with plans today should get them done and dusted in the morning, as the weather was due to get very wet and miserable by lunchtime. So I donned boots, jackets, hats and gloves and hit the garden early. By lunchtime, the sun was out, and I was making great inroads. By afternoon, it was looking like I could push on and get the patio laid, and all the gravel down and various bits and bobs finished, if the weather held on. And so it did. In fact, I even got a bit of colour on my cheeks (and rather large forehead). And the garden looks a lot better for it. The work, not the tan… you know what I mean…

I still felt, after the heavy lifting and general mullocking, that a run was in order. Something about the sense of freedom after a day of earth clogging your boots and shovels of soil; hauling slabs and rolling rocks… to be in light running gear and runners, bouncing along the trails… 35 minutes of trails followed, in the woods. Weather was still good. Of course, the west was getting drowned in rain, hail, sleet and snow, but we were spared here in the east. 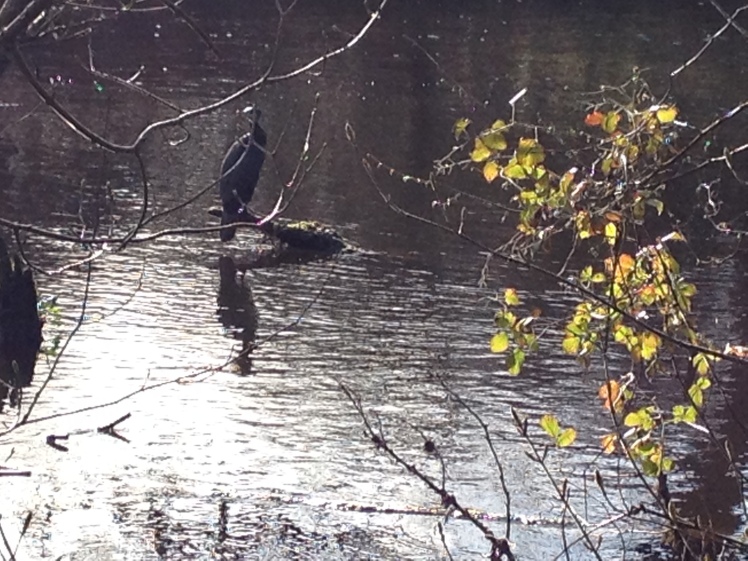 Our friend the cormorant was there again in the woods by the river; since identified by fellow blogger and expert culinary wiz Franck (aka Hungry Breton). Thanks Franck. Any recipes for cormorant pie?

A bath was well-earned by the end of the day, and half a tube of Deep Heat found its way onto my back. It staved off the worst of the stiffness.

Sunday: a run with Mark in the woods. The promised ugly weather seems to have arrived a day late, being fashionably Irish in every sense. Still, a 5k run is always better than sitting on one’s arse. And we followed up with hot chocolate (which does indeed require one to sit on one’s arse, but that’s okay 😉 )

Overall, a good week. I finally picked up my bike too, so hopefully when the crew situation is resolved, we can hit the roads and give it a proper Kildare welcome. And then I will set up the Mercian with some old tyres on the turbo, and will have NO excuses for not clocking up the hours in the saddle.