The evenings are closing in, and I suspect Keats never spent much time hanging around the Emerald Isle because his season of mists and mellow fruitfulness seems to have passed us by. Instead, it’s more likely that we get the tail-end of Caribbean hurricanes, mixed with the heady blend of burning coal and the residue from the local waste water treatment plant. And yes, that does make it sound like we live in some form of post-apocalyptic wasteland once found in the Black Country; the epicentre of England’s industrial revolution.

But we do not.

We are actually quite lucky really, I guess. We are about 11 miles west of Dublin, and for the most part, you can escape the 16,000 or so souls who inhabit Leixlip with relative ease, and there are canal towpaths, public parks and woods aplenty to enjoy if running is your thing.

Since Hardman at the end of August, it’s been a slow process of getting back on the horse. One of my running mates said to me the other day whilst out doing an easy 10k that he couldn’t imagine how I did the distance. And with a little distance of my own since then, it is interesting how perceptions change.

One of my Cheesy Slogans™ is Once it’s all in the legs, it’s all in the mind. And I hold to that. Long distance tri is no different. Once you have put some decent hours training in, the event is really a trial of endurance.* Once you have done a 4k swim, you know you can do the distance. 180k bike? If you’ve done a few 6-8 hour spins in training, then that too is manageable. And a marathon? You’ve probably done a few in your time, if you’re taking on an ironman-type race. And race it is not. Unless you’re a pro. For most of us lesser mortals, we no more race an ironman than we go for a run with a handful of thumbtacks in our socks.

But having said all that, it doesn’t take too many weeks away from solid, continuous training to view that particular peak with some trepidation. Even with the benefit of hindsight.

Anyway, the fitness level slump has been halted and is currently in reverse. If not exactly a total rout, we at least are moving in the right direction again after our unhealthy hiatus. It’s not as if I fell off the wagon. If I have an addiction problem, it extends to many biscuits with my tea. I scuttle past the biscuit aisle in the supermarket. The rest of the family do not appreciate my resolve. Many packets are sourced independently and find their way into the kitchen presses, and then then I find them… and that’s the end of that!

But in the last few weeks, the runs have increased in quantity and quality. Some decent 10ks in the park, back in the gym three mornings a week, Pilates every Monday… the biscuit belly isn’t looking too prominent, and the knees are holding up well. Whilst the swimming and cycling have sort of fallen off a cliff, I know those will pick up again.

One thing I did put my mind to since taking a break from all that training is linocutting. I have a plan to get into woodcuts and relief printing, and lino is the best place to start. The last time I remember doing a lino cut was in art college about 30 years ago, so it has been rather odd to buy some tools in the art shop and set about making my first print in three decades. 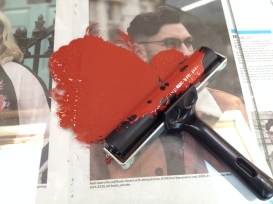 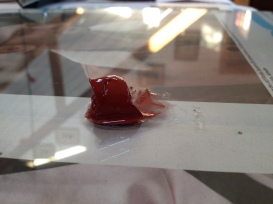 I was happy with the result for a first attempt. Once the dust has settled on a few big projects in work I will do a few more to get my hand in, and then progress on to woodcuts. No doubt a few of these will appear here at some stage.

Here is ‘Rook on Wire’, based on one of my own photos.

* Whilst endurance is about the right word, I particularly like what the thesaurus had to offer on the subject. If you think long distance triathlon, most of these words will chime with you, I suspect:

1 she pushed him beyond the limit of his endurance: toleration, tolerance, sufferance, forbearance, patience, acceptance, resignation, stoicism.

4 thoughts on “Tippin’ away”