IN WHICH THERE IS SOME RUNNING, SOME STRANGE CROSS-TRAINING, A GLIMPSE OF THE MYSTERIOUS ‘BATDAW’, AND A LOVELY FINISH TO THE WEEK

As promised, Wednesday was Vibrams Run #3. All told, about 5.5k in 6:16 pace, so still nice and steady. No ill effects as of yet, and I am staying on tracks and trails where possible.

Thursday is rarely a day for any training as we have drill in the station in the evenings, so the next run was Friday. The first kilometre felt okay at around 5:20 pace, which is a little more spritely than my normal 5:40 training pace, so for the craic I decided to see if I could get the next kilometre down under 5. And then the next. And the next.

Even the splits that happen over the climbs which generally drag your time into the 6+ region stayed under the 5 mark. By the time I hit the tenth and final split I was down to 4:26, and a total time of 49 minutes for 10k. It’s not fast by any standards, but according to the only timed 10k I have on record, it’s 2 minutes off my best time. So happy with that, as a training run.

Saturday was a fine morning, and I had designs on some free firewood. I took my chainsaw and my Dad’s trusty Dyna flatbed up the Avenue, and trudged up the hill. This was going to be a decent work-out! I was not greedy; I just lopped a few branches and started to carry them back down the hill; a short but tricky journey of about 150 yards in churned-up mud, wearing boots that are probably a size too big. The churn was down to the cattle in the field, and they are curious beasties. The herd came over to see this upstart making all the noise in their field and by my third journey they were attempting to surround me and when I had dropped that load and looked back up the hill they had taken possession of the area and strategically positioned themselves on top of the small timber pile I had made. Checkmate. These were bullocks, not cows, and some were Highland Longhorns, and they were frisky enough for a Saturday morning! So I returned later when they had got bored with their game, and collected the last few bits. Hill-work. But not as we know it!

It’s mostly ash timber and will cut, split and dry well over the Summer, and I will have another nibble at the fallen trees later, as long as the bovine beasties leave me alone.

Mark dropped by and we did 8k in 5:37 pace. The evening had settled in, and the moon was full. By the time we made it around to the far side of the river, the large bend of grassland and trees was draped in a wispy layer of mist. It was indeed a magic feeling.

First up on Sunday morning was my debut outing in a kayak. My friend is a regular communicant with all things ‘paddly’ and had offered numerous times to take me out on the canal from his local club and show me how not to fall in. For a first time, it was very enjoyable. Once I had worked out that the GP canoe I was in wasn’t going to topple over at any moment, I managed to work out (mostly) how to go in a straight line. And when you’re on a narrow canal, you have to go in a straight line! We did 5k all told, which I am going to count as cross-training 😉

Over the Summer, I hope to get in a few more sessions with my friend, and get more proficient with the whole business, not least how to fall out with some grace and not drown. I am assured that falling out is a given…

Once back home, S and I threw a few things into the car and headed out to Bray, a seaside town south of Dublin. In the mid-1800s, the railway offered Bray the chance to become something akin to Ireland’s Blackpool: a Victorian-style seafront with promenade and baths, and all the other trappings of tourism. It would be fair to say her star does not shine so brightly these days, and many of those early attempts to attract visitors are rather jaded or gone altogether. Possibly the beach, or rather the lack of it, doesn’t help. As anyone who knows the beach at Bray, it is a collection of rounded stones and pebbles. So it does little to encourage the beachcomber or sunbather.

We were doing the Cliff Walk. It’s something that has existed for a long time, but of course, it doesn’t officially exist until it has its own website… It’s a pleasant stroll of about 7k, and not too taxing. It takes you into Greystones, and there we had a nice lunch before grabbing a DART back to the car in Bray.

I suppose we are entering the tourist season now, with Patrick’s Day nearly upon us. That festival was usually the starting gun for the various tourist traps to set out their stalls. And of course, Patrick’s Day has morphed into Patrick’s Week. That’s Ireland for you… why have one day of madness, drinking and chaos when you can have seven… 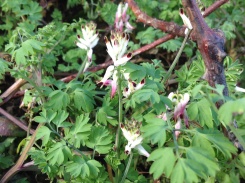 Above are some of the flowers and ferns we spotted along the way. Not being a botanist, I am happy to be corrected on any errors.

So, overall, an interesting and varied week, with some new activities. We can add ‘paddle’ to ‘saddle’!

And to finish off, here are two random images from the week:

It’s hard to make out that last one, but what you are seeing is not a bird flying ‘down’ the picture, but up. It’s a Jackdaw I have seen around for the last couple of seasons, and I call it ‘Batdaw’ as it has lost all its tail feathers, so when you see it in silhouette, it just looks like an enormous bat. It seems to cope well without them, though no doubt it’s a struggle.

Be good out there, and be safe. We have lost both joggers and cyclists in the last few weeks, in different road tragedies. Let’s stay out of those statistics…

6 thoughts on “Catch a falling star…”