IN WHICH WE COMMISERATE WITH A FRIEND AND COLLEAGUE WHO HAS A BIT OF MELTDOWN IN LIMERICK, COMPLETE OUR SECOND BRICK SESSION (SORT OF) AND EXPERIENCE THE RISE AND FALL AND EBB AND FLOW OF TRAINING…

Last Sunday was an early start. I normally hit the park with my mate Mark and we do anything between 5 and 8k, depending on numerous factors, some of which might include the weather, and how keen we are to hit Insomnia for hot chocolate.

Longish spins on the bike for me can be problematic given my roster situation with the fire service, so you have to grab whatever’s available. Sunday morning came up as an option but it meant hauling one’s backside out of the scratcher, and delaying my normal ‘breakfast run’. No matter. I managed a reasonable spin of about 52k, which took me out towards Hazelhatch, Ardclough, Straffan, Maynooth and back home by Lucan, through the park. Time-wise, about 2 hrs 7 mins, according to SmartRunner. Still not getting over the 25km/h average, but we have time.

Once home, I gave Mark a shout and we hit the trails for a quick 5k. Well, it felt fairly quick anyway. Brick session number 2, and that hot chocolate went down a treat. How many calories? How much sugar? Don’t know. Don’t care. I don’t ever count them. Even my attempts to introduce a scales into the bathroom failed; with two women in the house (wife and daughter), the experiment was initially met with interest but in reality was always doomed to failure, and the offending item was banished to the bedroom, where it now sulks, unloved and unused, under the bed.

All I wanted to do was keep an eye on my weight as I trained. Generally speaking, I don’t have much to lose (weight, that is), but there’s always a kilo or two hanging around, uninvited. Well, it wasn’t on the guest list, but somehow it snuck in through the side-door when security wasn’t looking, if you know what I mean. And of course, as we all know, muscle weighs more than fat, so if you do undertake a reasonably rigorous training programme, then there’s every chance you may lose a little initially and then stabilise and possibly even put back on a bit too, especially if you are working out a lot with free weights.

Monday was a rest day. Not because the programme says so. In truth, I don’t have a programme really. I am taking this as a sign that I am getting more relaxed about the whole triathlon gig. Which is rather bemusing, considering I only started two years ago, and have only done two sprint events, one Olympic, and one half-iron. The training plans for these are all still here in the office, laminated, mostly, and were followed fairly carefully. The ethos now seems to be to train according to a rough monthly plan of targets, and listen to the body for feedback, rather than consult a chart. Might work. We’ll see.

But on Monday, my body was definitely talking, and I was listening. I needed a rest day, and I took it.

Tuesday: run in the park for about 55 minutes. Legs felt heavy and more troubling was a sore left knee, which by the end of the run, in a show of solidarity, had been joined by the right knee as well.

Wednesday, and a mile in the pool. Normally a welcome relief but even then, felt heavy and not feeling the love for it. Knees still a bit sore.

Thursday: morning session in the gym and just did 20k on the bike. I would normally do that in 40 minutes, but the diary scrawls here say 44 minutes. Still suffering from the weekend. And what does any runner/triathlete do when there’s the inkling of an injury and they need to rest? Yes. They go for a run. Just to, you know, be a Doubting Thomas and poke themselves in the eye. Did a 65 minute run in the park. This was partly fueled by a desire to see if the knees really were a problem, and also by the change in the weather. The evening was fine, and it just said “come on out and run”. Well, that’s the whisper I heard anyway, your Honour, and I’m sticking to it. Felt good by the time I made it home. Something of a relief.

Friday: another mile swim in the pool, at the early morning session. These mile-long swims take me the full 45 minutes, normally. I possibly shaved a few minutes of this today, but I’m still not exactly swimming like a fish. Which reminds me of a quote from Shark Tale:

Luca: Hi, this is Luca the Octopu… never mind. Just listen up and follow these instructions, to the letter like. File cabinet, bottom drawer, there’s a package…

[Oscar opens the package to find the necklace he gave Angie… ]

Luca: That’s right, tough guy. We got your girl. Now there’s gonna be a sit-down – be there if you don’t wanna see her sleeping with the fishes…

[thinks this statement over]

Oscar: …the DEAD ones! Now nod your head if you understand.

Luca: Now tell me if you nodded your head.

Okay, so you had to be there to really get that. And if you were, you probably had young kids, like me. Grown up now, of course. That was twelve years ago.

The weekend is rapidly approaching. Who knows what joys await. Certainly more running, and a decent spin planned. Unlikely to soak my head in chlorine until next week. Should have the turbo trainer set up in the workshop too. Not a big fan; would always prefer to be out on the road, but sometimes that just isn’t possible. 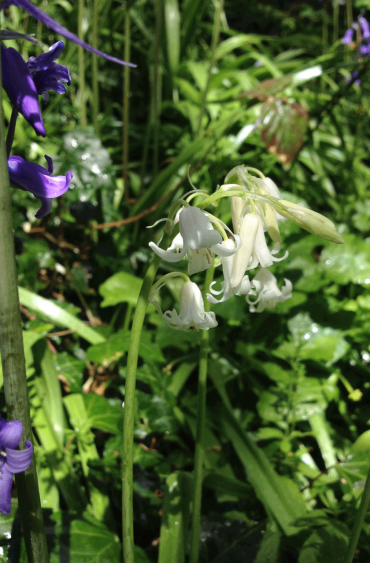 A garden escape in the woods near the river; this is the rather poisonous Monkshood.

So, the whole fueling thing. Well, a good mate who works with me in the station has been training hard for yet another marathon. He’s done quite a few by now, and like me, has so far not managed to break the four hour mark. Limerick last weekend was his most recent attempt. I was up in the pub, watching Leicester City draw with Manchester United, supping on a pint of blackcurrant, when the text arrived in to say he’d had a ‘mare.

4.27 in the end. Apparently they wheels came off at mile 19. Walked the last three miles. As he explained the other day, back in the station, it was like someone pulled the plug. He had had time to ruminate on the events of the day, and it all came down to fueling. He hadn’t enjoyed the meal the night before the race. Just picked the wrong thing. Didn’t like the taste of it. Didn’t enjoy breakfast the next morning, and again, probably didn’t get enough into the system. And then to cap it all off, didn’t fuel during the race. By the time the body ran out of juice around 19 miles (most seasoned runners these days know that the average bod has about 1,600-1,800 calories stored away in the muscles as glycogen, and that again, on average, we burn about 100 per mile, giving us the famous ‘wall’ that is part psychological, but mostly physical). That’s the basic premise. You can read (a lot) more here.

So, his race was already run, in a way, before the gun went off. Shame, because he worked very hard, and his fitness levels were way up there. Sub-four is definitely just a matter of time (sorry!) for him. He just needs to get a fueling strategy that will work, and he can avoid the crash the next time.