I wake to sleep, and take my waking slow.
I feel my fate in what I cannot fear.
I learn by going where I have to go.
‘The Waking’
by Theodore Roethke 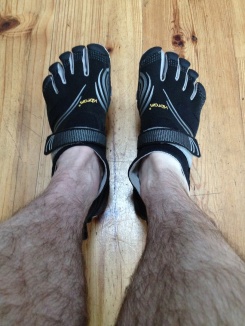 That’s a rather heavy way to start a short post. I’ve just stumbled on that poem and you can read the full thing here. (incidentally, Jim, he was from Saginaw. The only other time I can recall that town is when I sing ‘America’ by Simon and Garfunkel. Great tune).
So I popped on the Vibrams today, not without a little trepidation. Daft really. I go running all the time. What’s the big deal? I did a few laps of the kitchen table while Holly hid away from the lunatic in the rubber socks… 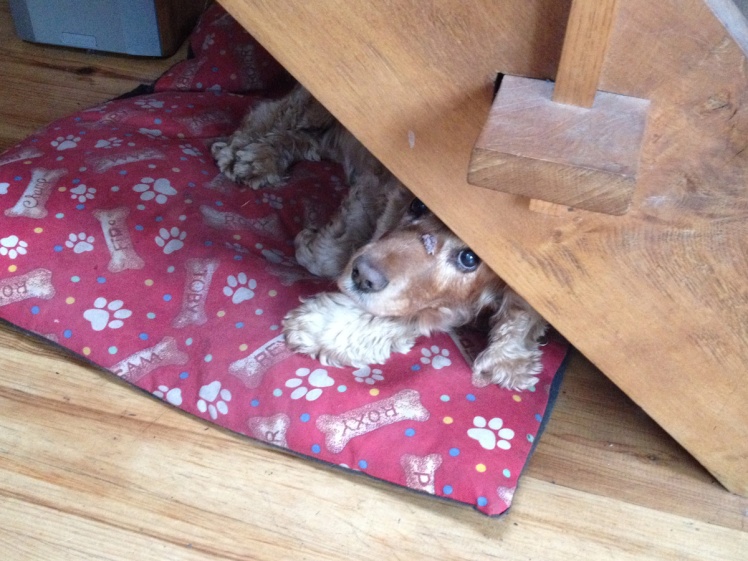 I made sure to wiggle the toes all the way into the pockets, and they felt fine. I avoided the first three-quarters of a kilometre or so of my usual run up the Avenue, and instead drove and parked near the first bit of grass in the park. Which I have to admit is an odd and counter-intuitive thing for me to do.
I did a few calf raises while I waited for the watch to beep and set off along the field where the cows and sheep graze, near the river. Within seconds, my feet were wet, which would be a very strange phenomenon in a normal pair of runners. In these, it’s more like a wetsuit, I guess: you get in, you get wet, you get used to it, you get over it.
Then there’s a stretch of hard-packed path and then off, into the trail proper in the woods. I did the full length of that and turned on my heels and came back the same way. Up to this point I was thinking about running. About form. About the lean. About cadence and pace. About foot strike… Feck, I was just thinking far too much about the whole process. As with most runners, the sheer act of running is usually enough to get the brain to slow down and stop thinking. But here I was, concentrating furiously…
And then the mind drifted a bit, as it does. Well, as mine does. There was a wonderful damp aroma from the Liffey on the left. Kayakers were out paddling. There was a faint aroma of Wild Garlic, and soon this very path will be thick with it, and the smell, on a muggy April day, will be overpowering.
And that’s when I realised I wasn’t worrying about running anymore. I was just… running.
I finished off by heading up the hill and onto the pitches for a little more soft grass before plunging back down to the car along the switchback path. All well. Knees, calves, ankles. Check. About 4.5 kms at about 6:15 pace. Or a little under half an hour. All told, a good introduction to the concept.
There is a good debate here about the topic, from people who have a vested interest in the subject. And by vested, I mean professional. Some possibly do have a financial interest too. And some good stuff here. Without doubt, if the science was clearly there to say ordinary running shoes of the modern era were bad for you, then overnight the shoe giants would turn their production over to minimalist shoes. But as we know, this isn’t the case. And there are a lot of studies out there, so you need to educate yourself on this one, and pay attention to your body. We all have different biomechanics going on, so it’s quite likely some of us would transition well to a barefoot style while others wouldn’t, or indeed shouldn’t.
What I am most interested in is trying to tweak my running style towards a more ‘chi’ style. And I have to admit, a large part of me cringes as I type that. It makes me sound like a total wanker, let’s be honest. But what I mean by that is I have done a reasonable amount of reading on the subject, and the concept of getting one’s feet underneath you and the straight posture to go with it, makes sense. The basic point is that by running barefoot, you force yourself to run differently. And the only way to convince your feet to do that is to run with a minimalist shoe (or none at all).
Once I was running today for about 20 minutes, I forgot what I was wearing. And that’s both a good and a bad thing. If I am going to try and tweak my style of running (to reduce and ideally remove the forward heel strike) then I will need to be cognisant of what I am wearing down there. Adding in the Vibrams should, hopefully, make me adjust accordingly. And only after many hundreds of kilometres will the style become the norm. And then, I suppose, it won’t matter too much what I am wearing. Without doubt, running on hard surfaces was not pleasant. Not for now, anyway. Maybe when I learn to glide over these like a deer… well, okay, a 50 year-old deer with two legs and a few extra pounds… okay, forget the deer analogy!
More reading, I suspect. And more running.

7 thoughts on “The (D)evolution of man…”