Busy week. Lots on in the office. Station is quiet, but then that is a good thing for the citizens of Leixlip and beyond as it means they have found clever ways to avoid coming a cropper in their homes and cars and other places. Well done all. 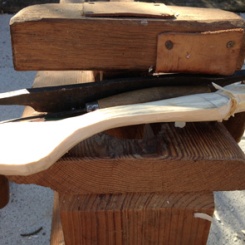 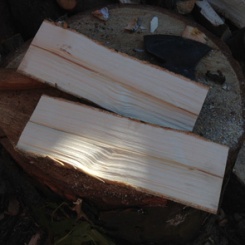 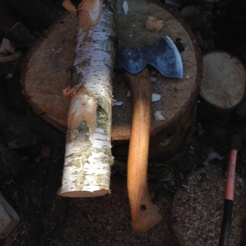 I was delighted to be able to carve this spoon for fellow blogger and friend, Jim, and his wife. I was also pleased at the speed of delivery from Ireland to the States, and especially pleased that the customs officials didn’t take a dislike to this strange object in the mail and set fire to it. Certainly, the solemn postmaster in my home town was convinced, what with all this terrorist stuff ‘n all, that the US postal service would shred the timber in search of hidden explosives. My thoughts were more prosaic; if anything was going to happen, it was going to get crushed and splintered beyond recognition in the normal hum-drum of delivery as parcels and packages are tossed from one trolley to another.

Thankfully, neither happened and this small slice of Kildare Silver Birch has found a new home in Michigan. May it bring good luck. Certainly, it was a revered species in olden times.

As I sit in the office and type this, I can hear a blackbird through the window. It could well be the same one I recorded last year at the back of the fire station. Blackbirds are great mimics, as any birder will tell you, and you won’t have to search far on the internet to find them copying a variety of modern sounds with eerie accuracy, whether that’s truck reversing alarms, sirens or mobile phones. Here is the recording I made last year, and it’s an uncanny copy of a car alarm. He’s at it again.

The above hurried snap is of the nest next door. This is a blackbird’s nest, so perhaps the male singing is the father of these young chicks? I didn’t hang about as the mother was nearby.

Snuck in a run on Wednesday with Mark. Nothing too taxing. Under 7k at a decent pace.

Last night I ducked out of drill at the station for an important meeting about the road through our park I mentioned previously. No doubt I will explain more about this, but in essence, unless you know the place well, it won’t mean a lot to you. It’s enough to say for now that, every now and then, just when you think things are looking up, mankind confirms everything that’s wrong with the world. Though I concede in the bigger picture, there are much worse things out there.

Afterwards, I hit the pool with some mates I train with. I could claim it was my way of washing away the anger and frustration of the meeting; a cathartic cleansing of the soul… but no, in truth, they just happened to be going and I happened to tag along. I haven’t swam for ages. See, I told you I wasn’t a real triathlete. But it was funny to be going through that old routine again, in the same pool where I did all my ironman training. The same old plastic baskets for your clothes, the same chlorine smells, the same waiting at the door for the previous class to finish before you thread your way poolside, grab a lane, don your hat and goggles and slip away from the side for the first of many lengths. All told, I managed about a kilometre, and had a chat with the lads too, all of whom are doing their first triathlon at the start of June. All of which makes me sound like some grizzled veteran as I explained my pet theory that of all the sports, swimming was really a breathing sport. Once you can get the hang of the breathing, you can work on the other stuff, like your kick, catch, stroke, pull, etc. I certainly can’t think of another sport that only let’s you breathe at specific times. Imagine going for a run and being told you can only inhale quickly every four seconds. And with swimming, there is the added importance of bilateral breathing too, which is handy if you are going to do open water swimming where going roughly in a straight line is a handy skill to possess. All three have signed up to do the Olympic triathlon and none have done any open water swimming as of yet. It could be an interesting few weeks!

Congrats to Kristian who has successfully completed his epic journey across the Sahara. Well, I suspect not the WHOLE of the Sahara, but certainly about 250k of this enormous and forbidding terrain. We await his blog with anticipation. Are ya listenin’? 😉

Last night, S and I watched a good programme on BBC called ‘Mind over Marathon’. There is a link here, but there is some chicanery involved in watching this due to rights issues. Essentially, if you’re not in the UK, you can’t see it online. There are ways around this but I’m not au fait with them. Plus, I have already mentioned the US postal service and explosives in this blog post, so red flags are popping up as you read this. Adding ‘fake IP addresses’ and ‘proxy servers’ might not be wise…

It’s a two-parter following ten people with mental health issues training to run a marathon. Some of you may insert a gag here about how sound of mind you need to be to run a marathon in the first place and we’ll let that one go for now, okay? If you have any experience of a mental health issue of any kind, you will know that they are generally not conducive to getting out there and doing something as challenging as running over 26 miles. Again, Doctor Google will provide countless articles expounding the concept of running as a fix for mental health. Let’s be clear here; it’s not a ‘fix’ nor would any of the proponents claim it to be. Check out this piece, for example:

It’s more about starting a conversation; sometimes with others, more often with yourself. It’s about setting some goals and reaching them. As a sport, hobby or pastime, it’s certainly cheap and easy to do. It burns calories reasonably well, gives you a good aerobic workout, improves your physical health, and also does some positive things chemically within the body and mind, not least of which are the famous endorphins you read about a lot these days.

But why? Why is this activity, where you hurl yourself forward and set anything not strapped or compressed down jiggling, so popular? On its most basic level, running is practical and cheap. It’s a simple, compact exercise that you can take almost anywhere, one that burns a lot of calories, and only really requires a good pair of shoes to be done right. But it’s more than that. It’s mental windshield wiping – an activity where, if you run long enough, far enough and hard enough, clears the decks and lets you forget what’s been bothering you…

From a chemical point of view, the endorphin rush theory might be misplaced. It may well be down to anandamide, serotonin or norepinephrine. And it turns out these have a part to play in low mood if they are lacking. But it matters not if you are not a bio-chemist. I’m not, for sure.  I can type on a keyboard, and I can search the internet like most of the modern world. And often this can leave you in a half-baked, half-assed place where what you held dear would appear to be wrong, but the new utopia also appears to be a bit shaky too. I think we’ve all had that experience somewhere along the line where the internet’s concerned.

But back to mental health, and that programme. We’re looking forward to seeing how it pans out. I have seen a few TV documentaries like this before. They can be a bit hit-and-miss. Certainly, this one has avoided coming across as patronising, which would be unforgivable. There are no panaceas in mental health treatment, no one-size-fits-all. Two things that I know will help are talking and working out. But often if you are in a bad place, these are perhaps the two things you will avoid the most. And that makes sense, even if you know yourself that you are avoiding things that could make a positive difference. If you are in that place, reach out to someone who can help out with one or other, or both of these things. If you know someone who you think IS in that place, drop by and have a chat. And maybe bring your runners. You may not be out pounding the pavements in minutes, nor running marathons, but you’ll both benefit hugely if you stick at it and give it some time.

Right, that’s enough from me about that.

And finally, Holly. Holly will sleep anywhere, anytime. She’s not fussy. I can’t imagine how many of these positions are that comfortable, but she seems blissfully unaware of my concerns…

3 thoughts on “The mind. It matters.”