IN WHICH WE HAVE A VERY BUSY FEW WEEKS – CATCH UP WITH RELATIONS ABROAD – RUN FROM ONE COUNTRY TO ANOTHER (AND BACK AGAIN), AND BID FAREWELL TO AN OLD FRIEND…

It’s been a busy few weeks. And proof (though none was needed) that life is what happens when you’re busy making plans.

My Dad made it out of hospital after a long stay. A broken hip in a freak accident with a gate during a storm. A stoic fellow, it has to be said. At the tender age of 81, he’s certainly rolled the dice a few times when it comes to mishaps. Perhaps falls short of Evel Knievel in terms of deliberately putting himself in harm’s way, but over the years, he has put his body through some fairly epic abuse, mostly through his work in the building industry.

Anyway, he is home, and seems to be settling in well. Quite mobile too; in fact, his activities would probably put the fear of god into his occupational therapist, if she could only see him. No harm that she can’t.

The week before last, I had to do my Breathing Apparatus Refresher for the fire service, which, in layman’s terms, involves wandering around inside buildings that someone has set on fire. It’s all in a controlled environment, albeit one that is very hot and sweaty, and mostly unpleasant. As you need both your wits about you, and your stamina, I had to forego all types of training. Which explains the gaping hole in the Garmin stats.

I picked it up at the weekend with a 15 mile run, followed the next day with a very short 3 mile ‘straightener’. S and I then traveled a long road to Cork (about 185 miles) to see one of our fave artists – the legendary Roy Harper. Then on Tuesday morning, I had an early start for a flight over to stay with my uncle in Wales. It was a short mid-week break to catch up with relations, not least my 97 year-old Great Aunt, who is still sharp as a tack.

It was lovely to see uncles and cousins and the wider family. Some ale was quaffed, and I even managed a run of about 6 miles which took me across the Welsh border from Monmouth into the English shire of Hereford. Not everyday one gets to do that I suppose. The following night I broke one of my cardinal rules when training: don’t play five-a-side. Mind you, it is not every day you get to play with a load of mad Welsh lads, and the husband of my cousin; one of the nicest blokes I know (and I say that in the knowledge that he is an Arsenal supporter…).

But while I was there, Saoirse rang from home. Holly’s health had taken a nosedive. They were on the way up to the vets, and it was looking very gloomy. The choice was simple: keep her hanging on ’til I got back, or let the vet put her out of her suffering. The blindness and deafness of late were not her chief complaints. It was the cancerous tumours that were always going to be the end of her. And so it came to pass.

I returned home late on Friday night, and on Saturday morning, I dug a hole in the flowerbed, near to where Oisín and Toby (earlier faithful hounds) lie at rest. And so our dear old, at time cantankerous, sometimes playful, often enigmatic and fundamentally ALWAYS her own dog, Holly, has finally gone. Tears were shed. Little dog treats were scattered over the fresh earth, and a single primrose was planted where she lies.

And now I have nobody to totally ignore me and my silly long runs and other daftness. Sleep tight, Ursa Minor. Holly Bear. Little One. 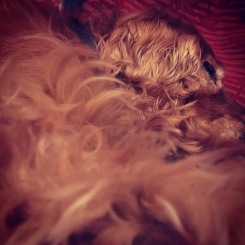 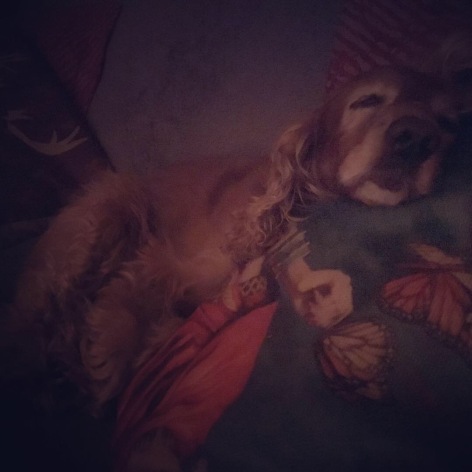 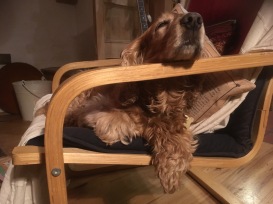 8 thoughts on “Sleep tight, Little One”