IN WHICH WE MUSE ON THE EFFICACY OF THE GYM AND PROMISE TO SET OUR MINDS ON THE RIGHTEOUS PATH OF GOOD HABITS, MANAGE A FEW PARKRUNS, AND FINALLY GET AROUND TO SIGNING UP TO ANOTHER EVENT…

I really need to get back into the gym. Not that I like the gym, of course. I mean, who likes the gym? Okay, steady on there at the back, you with the ripped torso, stinking of protein and straining at that tight-fitting T shirt. I understand YOU do actually like the gym, and good luck to you indeed. Each to their own.

It’s just that I am not a big fan. I do understand the benefits, and indeed, can see the changes a good gym strategy can bring. And when I was in serious training two years ago, I sense it made the difference for me in Hardman. But generally, I have to be dragged into a gym like a bold child needs to be escorted to the headmaster’s office.

After a good run of Pilates classes once a week at the end of last year (and let’s be clear here, folks, once a week is not enough for a workout, especially if that’s the only thing you are doing. Not enough to make a difference anyway), I slipped off the gym radar completely. And that’s a shame, as gains melt away like Irish snow in Spring.

So last Wednesday I did a 45 minute HIIT session in the local leisure centre. We joined this at Christmas for the leisure bit; you know, swimming, jacuzzi, steam room and sauna. The nice stuff. Well, it turns out as a member, you are entitled to attend these high-intensity impact training sessions for free. Whoopy-do! I gave it a go, and though nothing in it phased me, I am still sore, and it’s Saturday evening.

So I have taken the radical first step towards a new gym regime. No. I haven’t packed my gym back and left it at the door. I haven’t signed up to a season of training at the centre. Nope. I have set the phone alarm to repeat every Monday, Wednesday and Friday at 7.30am. For some, this is not the crack of dawn, I appreciate. I did actually have the first session planned for yesterday morning, but then we had a van fire at 4.30am and by the time I hit the hay again, there was no danger of hauling my ass out of bed. Such is the life of the itinerant fireman…

In other news, I have had a few parkruns lately. Last Saturday, I managed a reasonable 21:39, and came 8th in the bargain, and this week, Mark and I both did another run, and I came in on much the same time, with 21:43. My best is still 20:48, though in fairness that was a few weeks after Dublin last November, and there was still a spring in my step. I’d love to crack 20, but that would require some serious speed work. Still, good to have a goal. No doubt as Mark and I train for the Dublin Marathon this October, we will both nibble away at our parkrun PBs.

Speaking of parkrun, I can’t help but notice that commercialism is creeping in to this great democratic event. I am still hugely impressed at how smooth and well-run (!) it is, and how it’s all done for free. Well, free is of course a questionable concept. As someone once said, if you are not paying for the product, you are the product. Hard to say something mean about parkrun; it feels like a kicking a puppy (though I hasten to add I have never kicked a puppy…). But I just hope it doesn’t slip and slide into the mire of money. I have no idea how it is currently funded, as the organisation is wonderful. This morning, I rocked up at my local event, and there were dozens of volunteers there to help out, mark the course, marshall the runners, and take your times. And a few hours later, both an email and text to inform me of my time and a raft of other details. Normally, you would expect to pay for that kind of service. Not sure of the future for parkrun, but I sincerely hope it keeps going. It seems to have really caught the imagination, and encouraged people to get out there, and that’s really the main thing. Just getting out there. So, long may it last.

Plus, the back-room dept. managed to get Mill Lane Runners in as an official club in the drop-down menu. Woohoo! It may be one of the smallest athletic clubs in the world (with two members) but it’s officially recognised by parkrun, so I’m happy!

I have managed a few more runs as well, in the park, so the curve is going in the right direction. All I need to do now is get the gym gig up and running. I definitely need it. Apart from feeling and looking better, I need to keep working on the leg raises and other core exercises to balance out the body. Just running alone (and the bike will ramp up too) can mean strong legs pulling on glutes, hip flexors and IT bands, and leading to potential problems. So, a decent, all-round series of gym exercises will help. 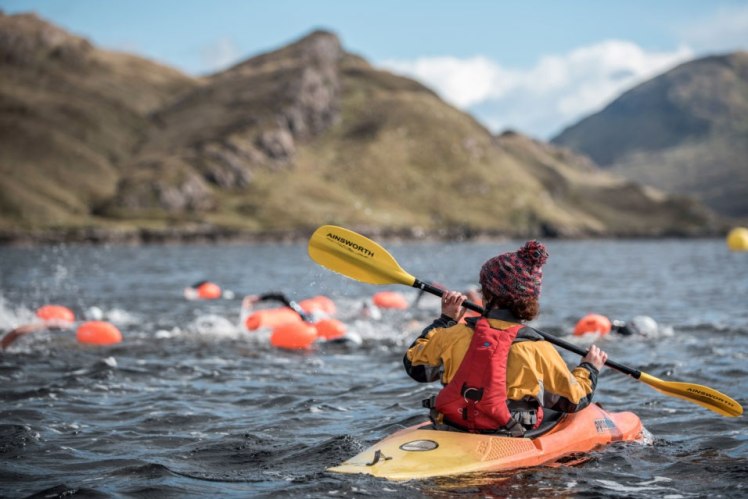 And finally, I cracked and signed us both up for an event in October. It’s the Great Fjord Swim, and here is the website. I have shamelessly robbed an image from their site, so I hope they don’t mind. I did the 2k version a few years ago, and really enjoyed it, though I was ill-prepared for the swim as regards proper attire and lube, but that’s another story.

S is going to have a crack at the 750m event which requires competitors to jump out of the ferry and swim to shore. I have signed up for the full monty of 3.9k, which is the long distance triathlon swim leg. I know I can do it, but when you know there’s a cut-off to reach the mid-point, and home, it focuses the mind. Anyway, plenty of time to train, and look forward to both hotel bookings.

Will there by jellyfish? Probably. The last time I did a swim like this (Hardman Long Distance Tri in Killarney) they were warning of lamprey. Not sure which is worse. I really – and I mean REALLY – don’t like jellyfish…