IN WHICH WE CONTINUE TO TRAIN AND DEVISE A CUNNING PLAN FOR ENSURING TARGETS ARE MET, AND WE DISCOVER SOMEONE HAS BEEN HITCHING A RIDE, PLUS ODI BREAKS A NAIL…

Another busy week, and a fine week, weather-wise. S had a significant birthday on Wednesday, and of course it would be rude to mention the actual age, but let’s just say it rhymes with ‘nifty’ and you might get the idea.

After pressies (and in particular, check out http://heidiwickham.com/portfolio/ if you want a fab animal pic), we went into the capital for some culture (a few galleries and a rather posh lunch in a well-known Italian restaurant). When we returned, the dogs had raided my office, found the birthday cake, and ate it. The buggers.

Later that evening, Dallan and I took them for a walk (to try and burn off some of that cake-fuelled energy) and Odi broke a nail. That may not sound bad, but when you consider Greyhounds have nails like talons, and this one was busted and sticking out a horrible angle, dripping blood, then you might get a better picture. A mercy mission to the vets, and a hundred quid later (and lighter), Odi emerged minus the broken nail, with a bandage and a very forlorn-looking face. No walks for a few days for him.

No broken nails for me. I was doomed to run. The mid-week sessions were fine, but it was the weekend that I was eyeing up with a little trepidation. 28 miles on Saturday, followed by 15 on Sunday. That seemed like, well, a lot, really. But having fallen short a few times on previous long runs, I was determined to get this one sorted. And the easiest way to do that was to run out along the canal for 14 miles, stop, turn around, and run home again. Simple really. Should have thought of that before…

So I set the alarm for 6am on Saturday, and after some breakfast and dawdling, and donning of stuff (I was wearing a little water backpack, plus the usual bumbag with gels, radio and phone), I set off.

The weather (as in the actual, real weather) had obviously not read the weather forecast (the virtual, not-real weather). Or perhaps it had, scoffed at it, and tossed the script casually over its shoulder. Instead of dryness we got drizzle. But in truth it was light enough, and intermittent.

As I went one way (west along the Royal Canal towpath), this family of swans was heading the other direction. And a little further on, I met a Heron, perched on a weed-cutter, doing a little early morning preening.

14 miles gets you a fair distance from home. 14 miles, to be exact. In this instance, it is just shy of Cloncurry Bridge. You have, at this stage, passed through the metropolis of Maynooth (a university town of about 15,000 souls) and the smaller town of Kilcock (about 6,000 and growing). You also pass in and out of Meath and Kildare quite frequently as The Rye Water and canal form some of the boundary.

Cloncurry Bridge, for those that know their local races, is the starting point for the New Year’s Eve Lock Up The Year run; a run I have done several times. In my case, starting out from the far end of Leixlip meant I had notched up a little extra on the clock before I had reached that point, so no Cloncurry Bridge for me. I was tempted to add on the extras, and maybe push it to 15, but discretion, as ever, won out.

I stopped for a quick snack and to charge the watch. I figured it might not last the full journey. Then it was time to head home. In fairness to the old Garmin; it may not have a great battery but it’s fairly accurate. Both distances showed as 22.54kms (14 miles in old money), and the pace back was marginally quicker. These are all relative terms: the pace is slow here. We are talking 6.44 min/km. That’s foot-dragging stuff, in comparison to the last couple of years marathon training. But horses for courses… I will be going slow and steady in Connemara, so apart from the Tuesday tempo run, most of my training has been fairly pedestrian.

But what it meant on Saturday was that I reached the magic 28 mile mark, and felt relatively unscathed. A quick shower, a meeting, and then some rugby to watch on the box (Leinster won the Pro14) and I went to bed with no ill effects. Two fire calls in the small hours meant a disturbed sleep, so I was glad of a lie-on in the morning. Then, rather than mull over it too much, it was a rinse and repeat; shorts and runners and a recharged watch, and out the door.

The plan was to get to 10 miles and re-assess, but in all, I managed the full half-marathon of 13.1, and was happy to call it a day. Pace was even slower than yesterday at about 7.11 min/km, but I was less concerned with pace and more concerned with getting the miles in. I took Freya for a walk in the park, and after a hot bath, the legs were still operational. So this was all positive stuff. The only time I would ever have done this sort of mileage was last year, along the Barrow. 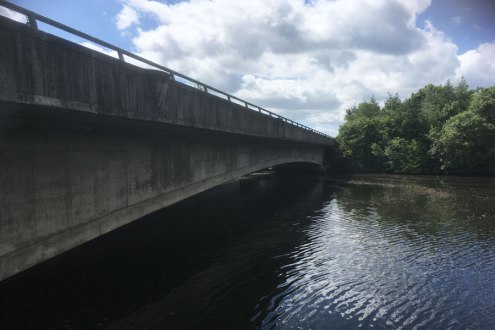 I found a stowaway on the run earlier today. A Ladybird was hitching a ride on my running top. I left it on the wall when I took the picture of the rapeseed. The weather today made up for yesterday’s shenanigans. It was beautiful, sunny and warm. Ideal for a swim, but that will have to wait now, alas.

So, next weekend should be a rinse and repeat of this one, but that simply won’t happen because I am doing a triathlon. It’s nothing like a 28 mile long run, but it should be fun all the same. And sometimes, you have to change the record and have a bit of craic.

This long run stuff can wear you down!